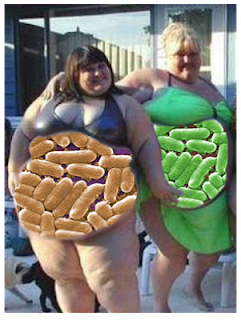 The authors of a scientific statement published in the American Heart Association (AHA) journal, Circulation, cited an analysis of the Framingham Heart Study, which found that “spouses, siblings, and friends were at greater risk for obesity if their “alters” (persons connected to the study subject who may influence the behavior of the subject) were obese” and that this effect was felt several circles out (see here).

Here’s a diagram of a social network of people in the Framingham Heart Study published in a NEJM article (here). It’s a cool diagram that is supposed to demonstrate, I believe, the connection between obesity and social connections (click on image for larger view): 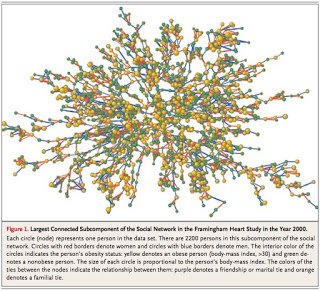 Based on this evidence that social connections may spread obesity, the AHA authors describe social network-based interventions and recommend social media as part of a strategy for the treatment and prevention of obesity.

But there may be another explanation for the social connections found in the Framingham study: obesity may be caused by bacteria, which can be spread from person to person.

Yes, there is evidence that “obesity in human beings could be caused by bacterial infection rather than eating too much, exercising too little or genetics, according to a groundbreaking study,” reports the Financial Times (here).

Dr David Weinkove, lecturer in biological sciences at Durham University (UK), said: “If obesity is caused by bacteria, it could be infectious and picked up from some unknown environmental factor, or a parent. It might not be behavioural after all.”

As the Financial Times points out, this “could have profound implications for public health systems, the pharmaceutical industry and food manufacturers.”

The research linking bacteria to obesity was done in Shanghai, China where researchers identified a human bacteria “linked with obesity, fed it to mice and compared their weight gain with rodents without the bacteria. The latter did not become obese despite being fed a high-fat diet and being prevented from exercising.”

If this is true, what could be the implications for the pharmaceutical industry? Will it be a boom or a bust? The drug industry is currently seeking a magic pill to treat obesity. They are studying complex, expensive molecules that focus on metabolism, not on simple, cheap antibiotics.

All this reminds me of the discovery that Helicobacter pylori causes ulcers. Ulcers can be basically cured with a combination of antacid and antibacterial drugs. According to wikipedia: The Helicobacter pylori bacterium was identified in 1982 by Barry Marshall and Robin Warren, who found that it was present in patients with chronic gastritis and gastric ulcers, conditions that were not previously believed to have a microbial cause. It is also linked to the development of duodenal ulcers and stomach cancer. However, over 80 percent of individuals infected with the bacterium are asymptomatic and it has been postulated that it may play an important role in the natural stomach ecology.

Will the REAL Nexium Facebook Page Please Stand Up?