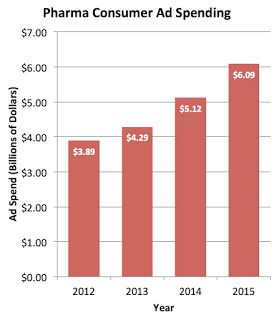 According to Kantar Media:

“Consumer ad spending by drug makers in 2015 reached $6.09 billion … after $5.12 billion was spent in 2014 and $4.29 billion was spent in 2013. These totals include spending on branded prescription drug ads plus unbranded ads by drug companies promoting awareness of a health condition and directing consumers to get more information, usually leading them to a company website where the prescription drug is offered as a treatment option” (read “Pharma Drug Ads: A Glass Half Empty is a Glass Half Full“).

Kantar Media’s CRO, Jon Swallen, noted that all the Kantar Media reports I’ve referenced included branded plus unbranded DTC. “The difference in spending estimates are attributable to (1) slight differences in the universe of media outlets that were tabulated; and, (2) updates to historical ad pricing and spending data that were received after publication of the earlier report.”

In any case, Kantar Media also presented some interesting data regarding the yearly trend in the number of Rx drugs with $500,000+ in annual ad spend as well as physician and consumer attitudes toward DTC advertising.

The rise reflects the new reality facing pharma; i.e., “squeezing of drug-makers by insurers and benefits plan managers looking to contain drug costs and steer plan members toward lower-priced generic alternatives, and drug-makers’ strategy of trying to bypass these budgeteers by advertising directly to consumers to create demand for their branded medications.” And, of course, the short-term goal of extracting as much profit from newly launched drugs before the patents expire or competitive drugs enter the market.

But the cost to the drug industry may be high in terms of pushback from physicians and consumers.

A February 2016 survey of physicians by Kantar’s Lightspeed All Global found “40% saying consumer-targeted prescription drug ads has hurt their interactions with patients.” Physicians complained that patients are “confused and ill-informed” and “[request] the wrong medication for the wrong reasons.” Physicians also complained that “self-diagnosing, wrong-headed” patients “waste their time” requiring them to “straighten out their thinking” and patients “[get] hung up on the side effects reported on TV.”

Don’t you just love the condescending attitude of these physicians? Keep in mind, notes Kantar, that “a solid majority of 60% do not find that to be the case.” I’d say the glass is half-full and also half-empty

Meanwhile, as for patients, Kantar Health’s 2015 National Health and Wellness Survey shows “37% disagreeing or strongly disagreeing with the statement that ‘drug ads help [them] have better discussions with [their] doctor.” So, 63% must not feel that way. Too bad, at least 20% of those discussions are “wrong-headed.”