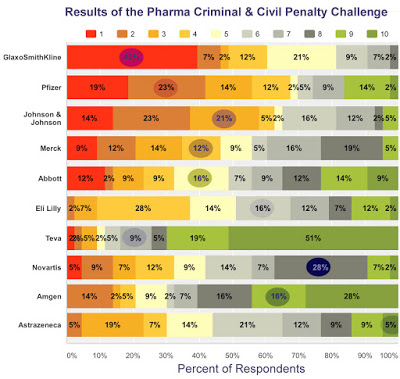 Public Citizen released additional data on pharmaceutical industry criminal and civil settlements, stemming from its March report tallying all settlements with both federal and state governments from 1991 through 2015. The new data provide company-specific totals for the most recent 10-year period (2006-2015), which demonstrate that, for most companies, the vast majority of penalties were paid out in those 10 years since 2006. During the 10 years from 2006-2015, 21 companies entered into two or more settlements with the federal government.

The Challenge: Can you rank the Top 10 of those companies in terms of the amount paid over those 10 years? Click on “Read More” to see how well respondents did.

Forty-three brave souls took the challenge. Only one person was able to put all the companies in the correct order, which is shown in the following chart (the company paying the highest dollar amount – GSK ($7,268 million) – is at the top of the chart, the lowest – Astrazeneca ($669 million) – is at the bottom). In the chart, the percentage of respondents who correctly ranked each company is highlighted.

I am Off to Paris and Doctors 2.0 & You Conference!