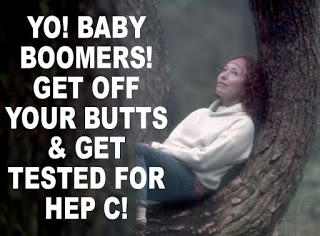 Direct-to-Consumer (DTC) drug ads are less and less effective according to several studies including the eyeforpharma Whitepaper “The Great DTC Shake-Up: Patient perspectives on direct-to-consumer advertising.”

One reason for this is a “negative reaction to the use of what could be perceived as ‘scare tactics’ or shock value to garner attention in a crowded media environment.”

In that report, I was quoted as saying “scare tactics might be good for awareness.” Now, however, I’m beginning to rethink that, especially when disease awareness ads are scaring a large portion of the population to get tested for a medical condition they most likely do not have.  A case in point is a new Hepatitis C disease awareness ad by Gilead Sciences focused on “Baby Boomers.”

Let’s look at the numbers and do some math.

The Centers for Disease Control and Prevention (CDC) estimates that 2.7-3.9 million people in the United States have chronic hepatitis C (here). According to Google, there are 76.4 million baby boomers – people born from 1945-1965 – in the U.S.

The CDC says that 75% of people with Hep C are baby boomers (here). That means 2-3 million baby boomers have Hep C. Now that’s a big number, especially if Gilead can sell its Hep C cures (Sovaldi and Harvoni) to all those people! However, is it necessary to scare 76 million people into getting tested for Hep C when only 3-4% (the Gilead ad says 1 in 30) of them have it?

I have my doubts. But the CDC recommends all baby boomers to get tested, which is a good reason for Gilead to push it (or perhaps Gilead influenced CDC to push it?). And TV seems like a good medium to run such an ad because it reaches a lot of baby boomers.

BTW, I would suggest that Gilead also do some advertising on Facebook, which these days has good ad tools (read “Bayer’s Betaseron Facebook Ad Uses a New Feature: Scrolling ISI” and “Will Drug Ads ‘Like’ Facebook?“) and a lot of baby boomer users.

Here are some other reasons why Gilead is running this ad now:

This Survey May Have Influenced Pfizer’s Decision to Offer Free Drugs...