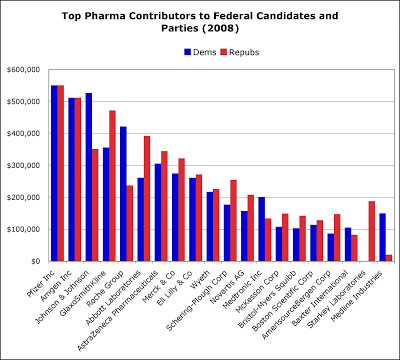 “Follow the money,” was the advice Deep Throat gave to Bob Woodward during the Watergate investigation. The same advice will help us understand which presidential candidate — Obama or McCain — is preferred by the pharmaceutical industry and the people who work within the industry.

A very useful resource for following the money flowing into the campaign coffers of the Democrat and Republican Parties is the Center for Responsive Politics. And to get an idea of donations by company in the pharmaceutical sector, you should look here. You’ll find a table there that looks like this (data as of July 28, 2008; click on image for an enlarged view): 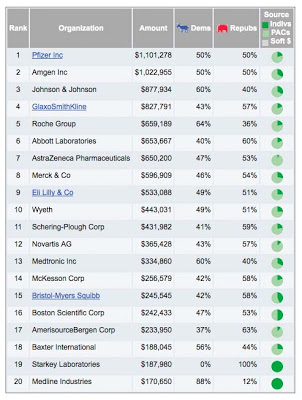 I’ve converted this data into a chart format, which makes it easier to see certain trends, especially which are the “Blue” (Democrat) companies and which are the “Red” (Republican) companies:

Here’s my analysis of Red vs. Blue Pharma Companies:

In the “Red” column are the following companies arranged in order of decreasing % of donations given to Republicans:

Starkey Labs, which is “a global supplier of hearing aids and products for hearing loss,” gave 100% of its $187,980 to Republicans. And all this money was given by individuals in the company, not through PACs (Political Action Committees). Makes sense. McCain probably needs the products that Starkey provides more than Obama does. Or should I say Starkey’s older-demographic customers are more likely to prefer McCain over Obama.

In the “Blue” column are the following companies arranged in order of decreasing % of donations given to Democrats:

Hmmm…! Only 5 in this category as opposed to 11 in the Republican camp. Interestingly, a significant portion of J&J’s donations come from individuals.

BTW, some of the largest pharma/biotech companies have donated approximately the same amount of money to both political parties. These neither Blue nor Red companies are:

These data are prior to the conventions held by both parties. It will be interesting to see updated data.

If you haven’t given me your opinion on Obama vs. McCain yet, please take 2 minutes to respond to the survey, which you can find here. If you have already taken the survey and wish to change your response (especially if you were undecided before and have now made up your mind who to vote for), you can go back and change your response as long as you are using the same computer and have not deleted cookies.

As always, you can remain anonymous or you can identify yourself if you wish to be quoted in a Pharma Marketing News article I plan to write for the October, 2008 issue. I keep all comments confidential and, if I quote someone, I always let them review it before publication.

Note: According to the Center for Responsive Politics, the numbers on this page are based on contributions from PACs, soft money donors, and individuals giving $200 or more. (Only those groups giving $5,000 or more are listed here. Soft money applies only to cycles 1992-2002.) In many cases, the organizations themselves did not donate; rather the money came from the organization’s PAC, its individual members or employees or owners, and those individuals’ immediate families. Organization totals include subsidiaries and affiliates. All donations took place during the 2007-2008 election cycle and were released by the Federal Election Commission on Monday, July 28, 2008.