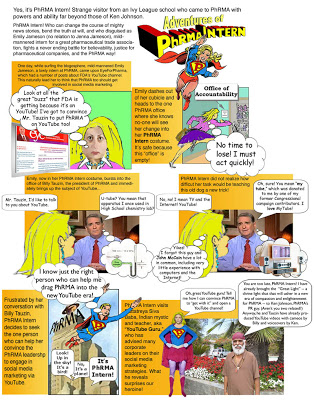 Click on the image to enlarge for easier reading:

BackStory
Yes, PhRMA is now on YouTube! Actually, it has launched an integrated media campaign called “Sharing Miracles,” which includes a Web site (set up to resemble a blog, although it does not accept comments from readers), a Sunday-morning cable TV show, and a YouTube channel — all featuring celebrity spokespeople like Montel Williams (also PhRMA’s Partnership for Prescription Assistance program spokesperson) and Greg Louganis (Olympic diving champion of long ago).

These and other “low-budget” celebrities are augmented by two lesser, even lower-budget, celebrities: PhRMA president & CEO, Billy Tauzin — who, representing the “thousands of hard-working men and women who develop new medicines to treat chronic diseases,” provides on-screen introductions and PhRMA Vice President and PR spokesperson, Ken Johnson — who provide the voiceovers!

It’s interesting that Ken Johnson provides the voiceovers. He may have had some relevant production experience in a former life. I know he has friends in the entertainment industry (see the PhRMA Intern episode “PhRMA Intern Makes Movie Mogul an Offer He Can’t Refuse!“).

Regarding Montel Williams, you may recall the PhRMA Intern episode “PhRMA Intern v. Montel” in which our heroine saves the world from Montel’s “explosive” temper, but fails to convince Billy Tauzin to fire his ass!

You can see the Greg Louganis “Sharing Miracles” video on YouTube here. As of this writing, the video was viewed 284 times. Let’s see if this plug can bump that count up.

I submitted the comment “A good series of videos. At last PhRMA engages in Web 2.0 activities!” But I don’t see it published — yet. This may be another case where the pharmaceutical industry dips into Web 2.0, but doesn’t really engage in two-way conversation with the public.

It should be noted that PhRMA has not really set up a “channel” on YouTube. Rather, Qorvis Communications TV, the corporate communications agency PhRMA hired to do the videos, has the channel (see here).