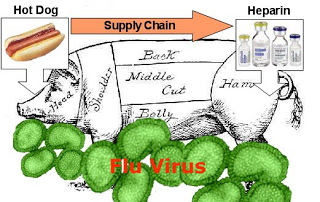 At the recent 6th Annual Public Relations & Communications Summit at Pfizer Headquarters in NYC, Chris Loder, Pfizer’s Head of US Media Relations, cited World Health Organization data that says 1% of worldwide sales of Rx drugs are counterfeit. Loder claimed that number is between 10 and 50 percent in “developing” nations. Pfizer defines counterfeit as “products deliberately and fraudulently produced and/or mislabeled with respect to identity and/or source to make it appear to be a genuine product.”

Loder spoke of Pfizer’s all out campaign to bring attention to the counterfeit drug problem, which obviously hurts sales, especially of Pfizer’s flagship drug, Viagra. He focused on the PR effort, including the “dead rat” movie Pfizer distributed in the UK in movie theatres and on television (see “Was a Rat Harmed in the Filming of This Pfizer Commercial?“). Loder’s efforts are part of Pfizer’s “Get Real, Get a Prescription” campaign (find the web site and dead rat video here).

“Counterfeit medicines are a risk to patient health and safety,” said Loder. “That’s the one message we send.”

While there is no known cases of someone being poisoned by counterfeit Viagra — which is what Pfizer’s film is all about — “up to 149 Americans died in 2007 and 2008 after taking heparin, a blood thinner, contaminated during the manufacturing process in China,” according to the 2010 “Drug Safety and Accountability” bill recently introduced in the Senate by US Senator Michael Bennet, a Colorado Democrat (find that bill here).

It wasn’t the active ingredient in Heparin that caused the problem, it was a contaminant that was deliberately added to heparin batches that were processed in China from pig’s intestines by the American pharmaceutical firm Scientific Protein Laboratories. The contaminant mimics the in-vitro properties of heparin, but is much cheaper than heparin, which is obtained from pig intestine. It seems that there was a shortage of pigs in China at the time, perhaps due to efforts to curtail swine flu.

So, yes, counterfeiting was the problem, but not counterfeiting done by renegade “bad guys” selling product through the Internet, which Loder focused on as the main problem. It was contamination at the facility responsible for producing product for sale in the US. And the product found its way into the normal drug supply chain unnoticed by regulatory authorities.

Therefore, another message that consumers should be getting is that the drug supply chain is also a risk to patient health and safety. This was most recently demonstrated in the problems Johnson and Johnson’s McNeil division had with over-the-counter children’s drugs (see, for example, “Trouble in the House that McNeil Built: Why Drug Company Silos are Useful“).

According to a Pew Prescription Project poll (“American’s Attitudes on Prescription Drug Safety“), Americans are confident that drugs produced and sold in the US are safe, but those produced in China and India are not (see chart below). 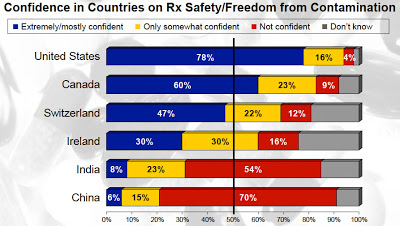 Perhaps what the poll did not tell respondents is that “up to 80 percent of the active ingredients in drugs used in the United States are made overseas” (see Drug Safety and Accountability Act).

The story about how drug companies may or may not be monitoring the drug pipeline for adulterated — counterfeit or not — products is NOT being told. Perhaps this is because the PR people cannot think of dramatic images such as dead rats and sleazy criminals to represent the problem with drug supply chains. Or perhaps focusing on the supply chain hits too close to home.