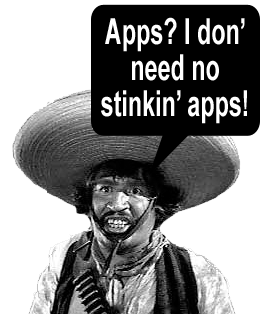 Pharmaceutical companies have a lot of apps in the market, and have been making apps for a long time, but their apps aren’t seeing downloads and usage on par with the apps from other industries.

That’s the conclusion of a new report from Research2Guidance (R2G), which analyzed more than 725 apps from 11 pharma companies.

According to R2G, the top pharma companies have 65 apps in the Apple and Google Play app stores on average, compared to 1 to 2 apps from the average health app publisher. However, even the pharma companies with the most downloaded apps have only accrued 6.6 million downloads since 2008 and can boast less than 1 million active users.

But app downloads are poor across the board. Data compiled by eMarketer (shown below), for example, indicate that the percent of US Internet users who do NOT download any apps (39.6%) is greater than the percentage of users who download FREE apps (35.7%)!

40% of US Internet Users Don’t Need No Stinkin’ #Mobile Apps!