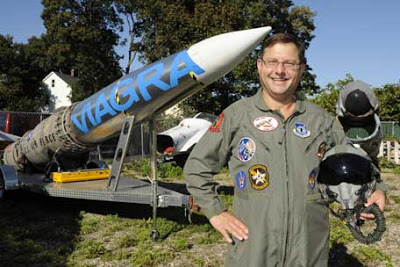 Ayre Sachs, the retired Israeli army sergeant who parked his “erectile projectile” Viva Viagra missile in front of Pfizer’s Manhattan headquarters, is not going to go softly into the night after losing his trademark infringement case to Pfizer (see “Warning to Buzz Marketers: ‘Pfizer did not get the joke.’“). That’s Mr. Sachs in the photo below.

“The judge was clearly blinded by the sheer power of this global corporation,” said Sachs, 49, who thought it was “more than just a little coincidence” that the ruling came exactly one year after his not-so-little stunt (see “Mission Aborted for Viagra Missile“).

Mr. Sachs clearly is not blinded by Pfizer’s power. He acted as his own attorney in the case and vows to continue to protest against Pfizer. 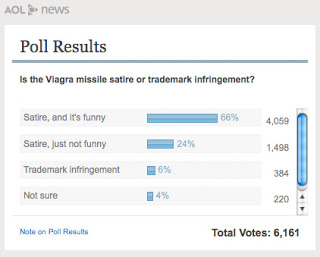 AOL conducted an online poll asking “Is the Viagra missile satire or trademark infringement?” More than 6,000 people responded so far. Sixty-six percent (66%) said it was “satire, and it’s funny” whereas only 6% thought it violated Pfizer’s Viva Viagra trademark (see screen shot on left; click for an enlarged view).

“I just wanted to say that this was not a marketing stunt,” Sachs said in a personal communication to me. “It was a fun day out. However, had it been a marketing campaign it would have been a very successful one. Pfizer got a huge coverage around the world after only two days on the road and a law suit. Imagine what could it done if they would have really embraced it? ” He based his opinion on the AOL poll results.

Sachs is most concerned that the judge refused to include his own survey results as evidence that the Viagra trademarks are not entitled to trademark protection because they have become so famous that they are now generic. The survey asked “what brand name they would use to describe an erectile dysfunction drug.” The judgment described Sach’s survey as an “ad hoc” survey of 100 people that was not created by a professional and that recruited respondents via Craigslist.

Sachs had this to say about that:

“The survey was NOT done by anything related to Craig List. It was done by law students who have either finished Law School and where awaiting the bar exam or a 2nd and 3rd year law students who presented people in public places with a questioner (sic) that proved that the public will use the name Viagra as a generic name to ED twice as much as they will use established generic names such as Kleenex for tissue paper and Escalator to moving stairs. I used Craig List to place a recruiting ad…that is all!”

Sachs claims that close to 400 people filled out his survey by hand!

“…so no one can say anything about the integrity of the survey in oppose to ‘Professional’ polling company where half to all the stuff are part time regular students or starving actors / out of home moms etc.”

Any “professional” polling companies out there want to respond to Sachs’ criticism of their staff’s creds?

“I do not mind to lose fair and square,” said Sachs. “I went out there knowing the risk having fun with that name on one of my missiles. I rejected three offers to drop the case from Pfizer knowing the risk – no problem. But I do not want to go down as an idiot who polled 100 people on Craig’s list after all the work and efforts that went in to this survey. The Judge can just reject it as un admissible (sic) but not they he did it apparently not even reading it.”

Speaking of unprofessional surveys, the AOL survey is also flawed in that it does not include the choice “Funny, satire (maybe), but definitely infringed trademark.” That’s how I would have voted.

P.S. Regarding the court’s reference to exhibiting the “Viagra-branded missile at an adult entertainment exposition in New Jersey with a banner promoting its advertising services,” Sachs remarked “Who are we kidding here? The adult industry is one of [Pfizer’s] larger consumer group who uses Viagra for recreational purposes.”

Hmmm…I wonder if Sachs has survey data to back up that claim?