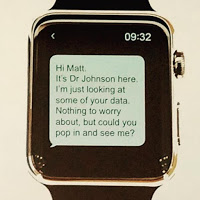 One of the 5 future healthcare trends discussed by a panel at the Lions Health 2015 Festival was “wearables, ingestibles, and implantables” (3 new buzzwords to add to my list!). Let’s create an acronym: WII (not to be confused with Nintendo Wii).

As an example of what the future might bring, the image of a message from a doctor on an Apple Watch was thrown up on the screen at Lions Health (see image on left).

This got me to thinking of some of the issues regarding WII.

First, I though this kind of message could actually be a promotional ad by a doctor to drum up new business. That would be unethical if there was no good reason to contact the wearer other than to generate an office visit.

Second – and more importantly – the very nature of this technology is how intrusive and inescapable it is. We are already complaining about never being free from our mobile phones. Anyone — including our bosses and advertisers — can now reach us wherever we are! Now include doctors, insurance companies, pharmaceutical marketers, etc. on that list.

It is somewhat more difficult to ignore a message on my Apple Watch than on my iPhone – it buzzes and shakes on my wrist and I automatically raise my arm to view it. It’s become a habit. Imagine if it were an implanted device!

Now, I know we can turn off certain features and opt out of receiving messages from certain sources. But, according to PEW research, “the vast majority of respondents – 91% – had not made any changes to their internet or cellphone use to avoid having their activities tracked or noticed. Only 7% reported that they had made these kinds of changes in ‘recent months'” (see here).

Americans have just given up on being left alone and healthcare marketers are rushing to take advantage of that trend to make advertising — which they mask under the label “healthcare” — inescapable. Here’s what one healthcare ad agency CEO tweeted during Lions Health 2015: “‘The future of healthcare is here it’s just not evenly distributed.’ Broadening access to care is critical.” Why would an agency CEO say this if she didn’t realize the marketing potential of “broadening access?”

The third thing I thought of was the effectiveness of WII to actually improve the quality of life. Read the following, which suggests that WII may not be as effective as Lions Health futurists envision:

Public’s Confidence in Science Remains Steady Over 38 Years, But Not...