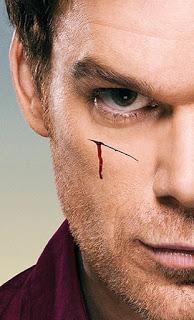 No, I’m not suggesting that marketers adopt Dexter’s “Code of Harry” (i.e., kill only bad people). Pharma already has codes. It’s arguable whether or not pharma follows its codes as scrupulously as Dexter follows his, but that’s not what I want to talk about now.

Actually, it’s not Dexter that pharma marketers should learn from — it’s Showtime, the cable TV network that created Dexter. Specifically, I’m talking about integrating a creative mobile/iPad app with a live event. The app I am talking about is Showtime Sync.

Showtime Sync allows fans of Dexter (and Homeland) to interact with exclusive content while watching the show. It has polls (e.g., How many times will Deb drop the “f-bomb” in the current episode?), quizzes, etc. You get immediate feedback on your iPad as other viewers answer questions (43% think Dexter should not have trusted Isaak).

My first idea for what pharma can learn from the Showtime Sync app is to include a similar listening feature into interactive iPad detail aids that reps can use in sales calls with physicians. The app can “listen” to the physician while he/she is being detailed by the rep and automatically serve up relevant content when it hears key phrases or questions. The rep doesn’t have to lose eye contact with the doc to fiddle with clicking this or that icon on the iPad to access the content!

OK, that sounds simple enough. But what about the social aspect — e.g., comparing data from other users in real time? I don’t see how this would work in one-on-one sales calls. But suppose there was an app that synced up with live presentations made at medical meetings or satellite symposia or key opinion leader presentations? About 100% of docs attending such meetings will already have iPads. If they had a syncing app on their iPads, they could interact with other attendees the same way I can interact with other Dexter fans using the Showtime Sync app. Attendees could be polled at appropriate times during the presentation and see the results. Of course, there are special audience polling companies that do this sort of thing, but apps like this will soon put them out of business, I’m afraid.