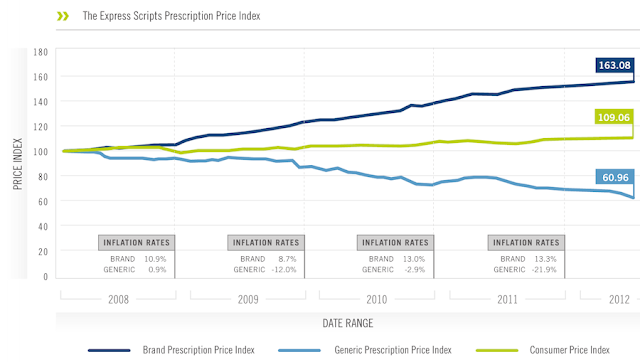 Here’s the chart that tells it all (click on it for a larger view):

In other words, brand drug prices INCREASED 63% since 2008, while generic drug prices DECREASED 39%. Overall prices in the U.S. increased 9% during that time.

The 35.2 percentage point net inflationary difference is the largest gap between brand and generic prices since Express Scripts began calculating its Prescription Price Index in 2008.

“The big takeaway from this for me is actually not so much that we have ongoing brand inflation, because we’ve always had that, though it’s larger than usual,” said Steve Miller, chief medical officer for Express Scripts. “What’s really remarkable is the gap (between branded drug prices and generics) is getting larger because of the number of generics and the discounts on those generics are steep.”

I would call the “larger than usual” brand-generic price gap in 2012 the LIPITOR EFFECT, meaning that the shift from branded Lipitor to generic versions may have played a big role in widening that gap. As an aside, recall another LIPITOR EFFECT: on DTC advertising (see “Lipitor Holds Key to DTC Ad Spending in 2012“).