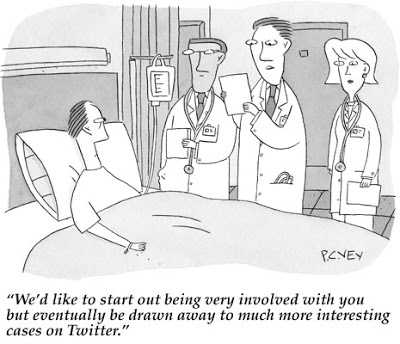 There’s a lot of buzz about using Twitter and other forms of social media to improve health care (see, for example, “More Patients Meeting With Doctors Via Web Programs Such as Skype“, and “Is The Future Of Healthcare Communications In Social Media?“). In particular, physicians are being encouraged to use social media — Twitter in particular — to help them deliver better health care.

But it seems that physicians are reluctant to do it for a variety of reasons (see, for example, “Are Doctors Avoiding Twitter Because of ‘Doctor Bashing’?“). If doctors DID become big fans of Twitter, we might see the scenario depicted in the following New Yorker cartoon*, which appeared in the recent issue:

*Note: I changed the caption, which originally read “We’d like to start out being very involved with you but eventually be drawn away to much more interesting cases down the hall.”