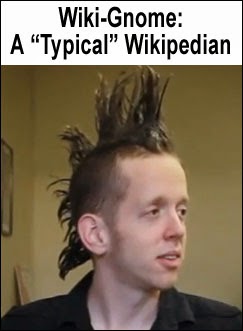 I’ve just finished reading the comments submitted to the docket regarding FDA’s recent draft guidelines for correcting third-party “misinformation” on Internet/social media platforms such as Wikipedia.

The comment submitted by Eric Barbour, a moderator of Wikipediocracy (wikipediocracy.com), a website dedicated to criticizing Wikipedia, immediately grabbed my attention. Barbour did not mince his words of condemnation of Wikipedia:

“Wikipedia is an insane place, and it cannot be handled or used as if sane people administer it.”

As evidence of that, I offer the image above left of Wikipedian Kevin Gorman, formerly known as “Wiki-Gnome.”

I learned of Gorman from a presentation by Siva Nadarajah, General Manager – Social Media @IMSHealth, who spoke at CBI’s recent “Social Media Compliance Strategies & Benchmarking Summit,” which I chaired in Philadelphia. His slide presentation linked to a Youtube interview of Gorman (here).

But I digress. Aside from belittling the sanity of Wikipedians, Barbour had this piece of advice for the pharmaceutical industry:

“Any drug or medical company that openly follows the proposed FDA guideline will quickly find their accounts banned and their changes reverted. And the FDA will ultimately look foolish.”

This rule, invented by Wikipedia co-founder Jimmy Wales, “absolutely forbids ‘paid advocacy editing’,” says Barbour. “Despite its questionable provenance, certain Jimmy Wales fans take it as ‘gospel’, and act on it as if it were ‘official’.”

By early 2012, the Bright Line Rule was fully formed and stated as such: “No editing of Wikipedia article space by paid advocates. There is absolutely no reason to ever do this – the talk pages, notice boards, wikiprojects, and OTRS provide ample opportunity for ethical engagement of Wikipedia. This is easy. The most common opposition to this comes from corrupt interests.”

Of course, pharma wants to edit Wikipedia articles directly or through paid advocates. The issue is what is the correct way to do that.

[Note: One such paid advocate may be IMS Health. Nadarajah admitted at the CBI conference that some people within his organization — not him — comprise the “WikiCorrect-Health” group, which maintain their goal is to “ETHICALLY” fix legitimate errors (for more on that read: “WikiCorrect-Health – Who, Who Are You! Who, who, who, who? ‘Cause I really wanna know.” COMMENT from Siva Nadarajah: “WikiCorrect, the IMS service/product does not edit Wikipedia directly. We first validate the edits provided by our pharma clients for “fair balance” and communicate them via the talk page to page admins (based on FDA guidelines). The page admins then make the corrections (or require additional details).. So far, the admins have been very co-operative with our approach.”]

Not only does the pharma industry have to contend with FDA regulations when attempting to edit articles on Wikipedia, it must also contend with “insane” Wikipedians who, says Barbour, “will then go to the news media. And tell them the Federal government is advising what they call ‘COI abuse’ on Wikipedia. And the news media will probably listen to them. (Journalists love Wikipedia, because most of them are lazy and they can use it to “check facts” quickly, despite the known issues with its accuracy.)”

Barbour! What a joker!

Some comments submitted to the FDA touch upon the correct way to edit Wikipedia. BIO, for example, said “we believe the best way to correct misinformation [on Wikipedia] is to edit it directly. However, we would like to note that a firm may not have the ability to disclose its affiliation on the same screen as the correction of misinformation, due to the way the site functions.”

The Advanced Medical Technology Association (AdvaMed), which represents manufacturers of medical devices, noted that “authorized company representative comments would provide for optimal and authorized correction of misinformation.” It asked the FDA to “clarify whether the individual(s) affiliated with the firm correcting the misinformation must reside within a functional area of the company independent and unrelated to the sales or marketing or commercial organization (i.e., medical affairs or scientific affairs).”

This is getting close to what some prominent, sane, health-focused, Wikipedians, such as Dr. Bertalan Meskó (@Berci), believe is the best way for pharma to correct information about its products on Wikipedia (read “Pharma Urged to Employ Wikipedia Editors“).

The Patient, Consumer, and Public Health Coalition went one step further and suggested that FDA, NOT the pharmaceutical industry, should be responsible for correcting Wikipedia misinformation about drugs:

“Since Wikipedia has an army of volunteers whose job it is to enforce its rules aimed at reducing the use of their platform for promotional purposes, and since those rules are currently ineffective for ensuring the objectivity of information about medical products, FDA staff should reach out to Wikipedia officials to determine how the agency can provide information that would help Wikipedia determine how to improve its own efforts to ensure that information about medical products is “neutral” rather than promotional.”

This is something I wrote about in another Pharma Marketing Blog post: “Should FDA or Pharma Correct/Edit Drug Information on Wikipedia?“