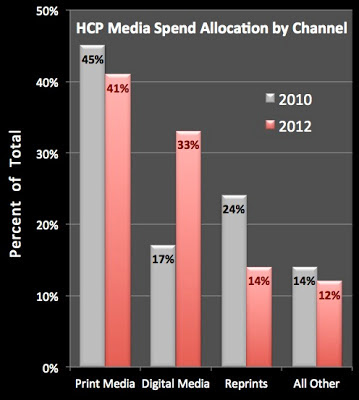 Today, I posted on Twitter “HCP digital spend by pharma to equal that of print this year, forecast says.” That tweet is getting a lot of retweets and Mike Young (@Brandshaping) responded “The times they are a changing.”

I am afraid my tweet may be misleading. I should have said “HCP digital MEASURED MEDIA spend by pharma to equal that of print this year, forecast says.”

My tweet points to a chart I created from data published in a whitepaper from Compas: “Follow the Money– a Point of View on
HCP Media Trends in Pharma” (find it attached to this post). Here’s my chart:

This looks pretty impressive. But let’s make sure we understand what we are talking about here.

First, this is about “measured media” spending focused on healthcare professionals (HCPs). “Print Media” refers to ads in medical journals, “Reprints” refer to reprints of medical journal articles that sales reps hand out to physicians, and “Digital Media” refers to online ads placed on sites frequented by physicians (e.g., WebMD). “All Other” includes Convention Media (ads at medical conventions), In-Office Media (I’m not sure what’s included in this; whatever it is, it’s less than 1% of the total spend), Point of Care Media (patient record forms, prescription pads and the like), and Direct Mail.

This analysis does NOT including detailing spend, which is the biggest promotional spend by pharma.

As discussed in a previous post to Pharma Marketing Blog, the pharma industry spends about $17 billion on TOTAL physician promotion: $15 billion on detailing and $2 billion on meetings (see “U.S. e-Detailing Spending Up 74% in 2012. Yet Pharma Still NOT “‘Digitally Mature’“). I assume these numbers include digital, but NOT measured media spending, digital or otherwise. Digital promotion is only 5.2% of the $17 billion total. This means that the U.S. pharma industry, which spends nearly $1 billion on professional digital promotion, has a long way to go before it reaches “digital maturity” on a par with other industries. I estimate that “par” to be 20%.