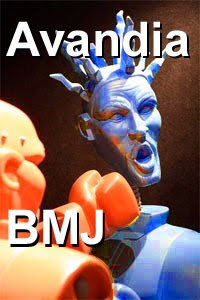 In a BMJ editorial, editor Fiona Godlee contends that Avandia “should not have been licensed and should now be withdrawn.” She cites problems that FDA discovered with the RECORD post-marketing study and finds fault with regulatory agencies’ oversight of such studies.

Regulators should “should require a higher quality of evidence,” Godlee says, “including proof that new drugs are better than existing drugs before being licensed. And if they do ask the manufacturer to undertake post-marketing trials, they must do a better job of overseeing the way these trials are designed and done.”

Godlee also called for other reforms, including “far greater transparency from industry and the regulators, including access to raw data and funding for independent trials…”

Holding out a carrot in front of this stick, Godlee suggested that “the patent for new drugs should be extended, from the current 20 years to perhaps 25 or 30.”

Personally, I don’t think it’s a good idea to extend the patent life by up to 50% for “greater transparency” by the drug industry. But Godlee is also calling for “funding for independent trials” as part of the deal. Is she talking about post-marketing trials like RECORD or the clinical trials upon which first approval for marketing is based? Where does the funding come from? I suppose she means that drug companies should somehow pay for “independent trials.” That’s going to be a problem even bigger than the problem of funding “independent” physician continuing medical education.

No matter how independent the pre-marketing trials are, the data are limited to a small population, which is often not representative of the population at large that will be exposed to the drug once it’s on the market. That means additional studies may still be required after the drug is on the market to evaluate the safety among a larger population.

Perhaps having a drug on the market while additional studies are still underway is NOT as big a problem in Europe as it is in the U.S. where direct-to-consumer (DTC) advertising plays a big role in driving millions of consumers to their doctors to demand new medications. As online marketing begins to play a bigger role in marketing to consumers, this effect can be heightened. A recent study by About.com, for example, revealed that online health ads activate consumers as a result of seeing a healthcare (ie, drug) ad online:

IMHO, a better solution — in the U.S. anyway — might be to temporarily prohibit DTC advertising of drugs that require additional studies until those studies prove that the drugs are safe and effective as used in the marketplace. The carrot can still be an extended patent life as Godlee suggests. I have suggested this before — see “Restrict DTC, but Extend the Patent for New Drugs” — and the topic may arise again in my upcoming debate with DTC advocate Bob Ehrlich (see “The Great DTC Debate. Round 1: Are Drug Marketers an Endangered Species?“).