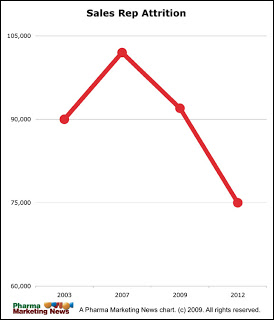 We all know that the number of pharmaceutical sales representatives have declined significantly since the high point in 2007 when approximately 105,000 members of this species were alive and well in the U.S. 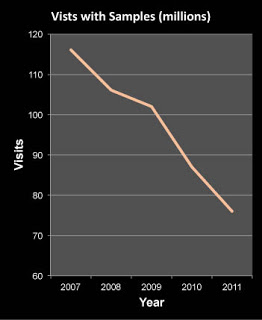 There are lots of reasons why sales rep visits that include drug samples is declining. For one thing, many physicians are refusing samples because they think they promote more expensive treatments. However, it’s more likely due to cutbacks to the sales force. “If we’re seeing a decline in samples at this point, today one of the major drivers is the drop in the overall number of sales calls being delivered,” Jerry Maynor, director of marketing and business development for CSD’s U.S. division. eSampling, where physicians can order samples without the sales rep, is a very minor activity that does not account for the trend (only 5% of doctors want to receive samples by mail only).

What percent of total details include samples? That gets complicated because numbers are all over the place. In 2008, there were 92.93 million details according to data reported here. But CSD says 106 million details in 2008 included samples. Of course, that’s a mathematical impossibility. I will have to track down more compatible numbers.

How much do drug companies spend on samples? That’s a number in dispute, depending on how you calculate the value of samples (ie, retail value of samples vs. Average Wholesale Price; see here). By CSD’s estimate, in 2007, drugmakers spent nearly $8.4 billion on samples. That figure fell to about $6.3 billion in 2011, the most recent data available.