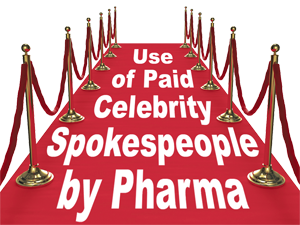 Compensation
The subject of compensation for for celebrity pharma spokespeople was brought up in a Pharma Marketing Talk interview of Ambre Morley, Associate Director, Product Communications, Novo Nordisk, regarding Paula Deen, the celebrity chef who was hired by Novo Nordisk as a diabetes spokesperson (read/listen to “Novo Nordisk Defends Choice of Paula Deen as Diabetes Spokesperson”).

Influence of Celebrities
Celebrities, however, do not have the power to directly prescribe drugs. But they are VERY influential. Morley admits as much: “When you talk about the pharmaceutical industry and it’s spend on celebrities, it’s interesting because you wouldn’t see celebrities working on campaigns if it wasn’t a good investment from a marketing point of view.”

Survey Results
That’s just one of the questions Pharma Marketing News asked in its “Use of Paid Celebrity Speokespeople” survey. The survey specifically asked respondents to indicate how strongly they agreed or disagreed with the following statements regarding the use celebrities as pharma-paid spokespeople.:

The results are summarized in the following chart, which shows the percentage of respondents who strongly agree or somwehat agree with each statement (N=112). Pharma Respondents (orange bars, N=64) are comprised of people working within pharmaceutical companies or agencies that work for pharmaceutical companies. Non-Pharma Respondents (green bars, N=49) are everyone else (consumers, healthcare professionals, academics, and publishers/bloggers). 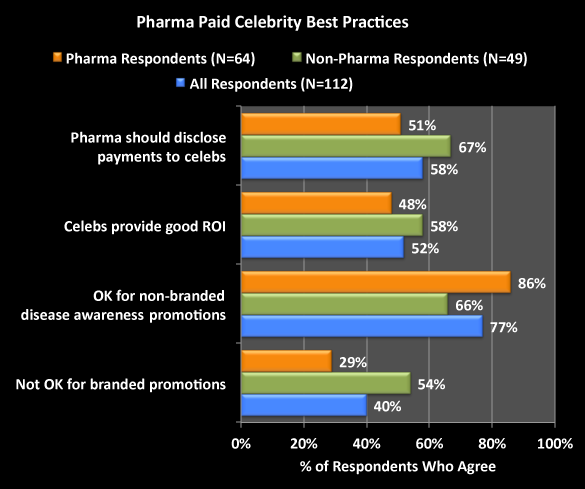 Comments from Pharma Respondents include:

Comments from Non-Pharma Respondents include:

The Role of Social Media in Managing Chronic Diseases: Focus on...