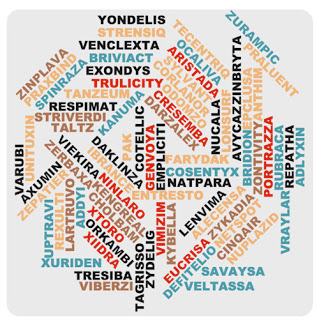 The naming of drugs has been described both as a science and an art, which is also true about marketing in general.

No matter what side of the brain is involved, there must be a reason why drug names are often ridiculed as being “absurd.” The issue even made it to Saturday Night Live skit in which Oscar nominee Octavia Spencer sued Merck for naming dozens of drugs after members of her family (“Pharma Gets Drug Names from Octavia Spencer’s Phone Contact List“).

Perhaps my reporting of that skit was the reason why my long-time friend, Jonathan Richman, founder and director of Dose Marketing in Cincinnati, posted a study he did of prescription drug names on LinkedIn. His post – titled “The Absurdity of Pharma Drug Names” – railed against the many drug names that are difficult to spell and pronounce. He questioned the validity of the “urban legend” that drugs are named this was to make them more memorable.

Jon analyzed over 200 brand names of drugs that were approved between 2010 and 2016 and made some interesting observations. Or at least he quantified what many of us already know; that is, drug companies love the letters Z and X, but hate the letter W.

Xeljanz – a Pfizer Rheumatoid Arthritis drug – has both an X and a Z in its name! I know how to pronounce that name correctly because it was the top-advertised drug in 2016. Pfizer – which also has a letter Z in its name – spent $189 million to advertise Xeljanz to consumers in 2016 (read “Over Half of the DTC Ad Spend by the Top 10 Advertised Drugs in 2016 was Made by Pfizer“). Probably about 75% of that was spent on TV advertising, which may have been necessary to make sure people know how to pronounce the drug when they asked their physician for it.

Richman also noted this: “if you are pronouncing this drug correctly,” he said, “it’s because you saw it on TV way too many times and not because you can easily apply standard English pronunciation rules to the word.”

The Z in Xeljanz comes at the end of the name, not the beginning where an X takes on the Z sound. Meanwhile, the Z sounds just like an S, but is more sexy-looking, I guess. Or perhaps it conveys an impression of strength or effectiveness. Indeed, some linguistic theories suggest that consumers have a more positive impression of drugs with complex names. Other studies, however, suggest that complex drug names were perceived as more hazardous than simple drug names.

A study published in the June, 2013, issue of Journal of Health Psychology, for example, found that study participants rated medications with easier-to-pronounce names to be safer and just as effective as complicated-sounding drugs.

“In general, people judged drugs with simple names as safer, assumed that those drugs had fewer side effects and were more willing to buy those drugs,” noted the researchers.

This has an impact on adherence because half of the time patients don’t even fill their prescriptions for drugs; that is, they are not “willing to buy” (read “If Rx Drugs Had Simpler Names, Would Patients Be More Adherent?“).

One other problem with so many drugs using the same odd letters in their names is that this may cause dispensing mixups. The Institute for Safe Medication Practices, for example, cited reports about Zyrtec and Zyprexa mixups. One report described a previously controlled psychotic patient who accidentally received Zyrtec instead of Zyprexa and then relapsed.

Richman speculates that the one thing that explains why all of these drugs seem to use a common naming convention is that the names came out of the same marketing shop used by many pharmaceutical companies.

“It might be time to look for some different thinking elsewhere,” noted Richman. Of course, he recommended his own agency. ☺

For more on this topic, read the March 31, 2017 issue of Pharma Industry News Update.