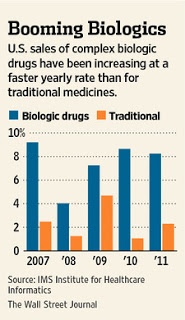 The pharmaceutical industry often wonders why it has such a bad reputation with consumers — nearly as bad as the tobacco industry — considering it saves lives, as opposed to the tobacco industry, which ends lives. Well, to understand why this is so, you need look no further than actions such as Abbott’s April 2, 2012 citizen’s petition against FDA approval of biosimilars (read more about that and find a copy of the petition here: “Abbott Labs Petitions FDA to Disallow Biosimilars“).

According to the FDA (here):

The law protects the original biologic drug from copies for 12 years after approval.

“If the challenge succeeds,” says WSJ, “less-expensive versions of complex biologic drugs couldn’t go on sale in the U.S. for years, and consumers may never have access to facsimiles of existing treatments such as Abbott’s rheumatoid arthritis therapy Humira, which had $3.4 billion in U.S. sales last year and is projected to be the world’s No. 1-selling drug this year.”

Abbott “contends that its drug isn’t copyable under the law, because regulators would need its Humira trade secrets to approve a biosimilar and would thereby violate its constitutional rights. The company said it is protecting an investment of ‘massive amounts of capital’ and the ‘great risk’ it took developing the drug. In fact, Abbott contends that no biologic approved before the law was signed should be considered copyable.”

“Critics of Abbott’s position say that the argument lacks merit and is anticompetitive, and that trade secrets aren’t necessary to prove that a copy will work like the original. The critics also contend Abbott is backtracking on its support for the legislation and ignoring the potential impact on the country’s spiraling health-care spending.”

Considering that Abbott Labs will soon have the NUMBER 1 selling drug in the world (see below) — taking the crown from Pfizer’s LIPITOR — it makes perfect sense that Abbott should act NOW to protect its patented money-maker, years before it finds itself in the not-so-envious position of Pfizer, which fought on even after the bell rang on Lipitor (see “Pfizer Throws In the Lipitor Marketing Towel“). Note: Humira’s U.S. patent expires in December 2016

With the filing of this petition, Abbott Labs may also take on another “crown” previously held by Pfizer — the world’s most hated pharmaceutical company. Good luck with that Abbott.

Booming Biologics
Abbott, however, is just the “poster boy” (or “patsy”) chosen by the drug industry to take the shots by filing this petition, which really speaks for the entire industry. Patented biologics is a big business and represents the future of the pharmaceutical industry.