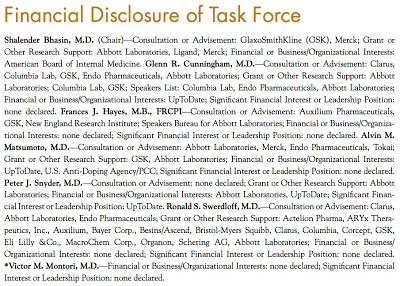 In reviewing what pharmaceutical trade publications had to say about the industry in 2012, I came across MM&M’s “All-Star” winners of the year. Sanofi, for example, was MM&M’s “All-Star Company of the Year.” What caught my attention, however, was the “All-Star Marketing Team of the Year: Androgel.” That team is AbbVie – Abbott Laboratories’s recently spun-off independent biopharmaceutical company – and its agencies, which include Digitas Health for consumer and AbelsonTaylor for professional ads.

I didn’t realize that Low T drug sales in the U.S. reached nearly $2 Billion a year (ending October 2012) and that the $1.37 Bn in sales of Androgel represent about 70% of that total. In fact, Androgel sales increased 19% over that period thanks no doubt to direct-to-consumer (DTC) marketing coupled with physician marketing. No wonder MM&M gave Androgel marketers a rave review!

One of the marketing “initiatives” that MM&M highlighted was the “Drive for Five” campaign, which urges men to know their testosterone (T) levels, in addition to lipid, BP, blood sugar and PSA numbers. On the website (http://www.driveforfive.com; “Mens Health | Learn about 5 risks to mens health”) is an animated “gear box” that shifts from high cholesterol (first gear) to high blood pressure (second gear) to high blood sugar (third gear) to high PSA (four gear) and, finally, to low testosterone (fifth gear). 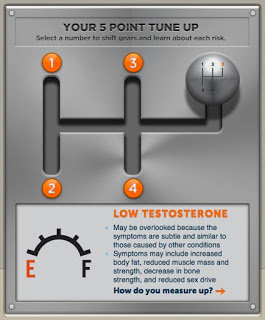 Perhaps first gear — the LOW gear — would have been a better choice for LOW testosterone (it also would have been depicted FIRST in the animation). But, what do I know? I’m not an award-winning pharma marketer.

What I AM, however, is a representative member of the target audience for the “Drive for Five” campaign, except that I am not comfortable driving a stick shift — in fact, I don’t think I ever drove a stick shift car in fifth gear! I guess I don’t “measure up” as a good target for Androgel advertising after all 🙁

It seems that “driving” is a theme used by many pharmaceutical marketers. Recall, for example, Boehringer Ingelheim’s “Drive for COPD” campaign (see “Danica Patrick: NASCAR Driver, Super Model, Superbowl Lingerie Ad Model, & COPD Spokesperson All Rolled Into one!“) and Novo Nordisk’s “Drive with Insulin” campaign, which posted the branded tweet heard round the world (see here).

So I’m not giving the “Drive for Five” campaign many kudos for being innovative. In fact, it’s a bit “derivative” in that “Drive for Five” is a campaign slogan used by many other brands as evidenced by these images found via a Google search: 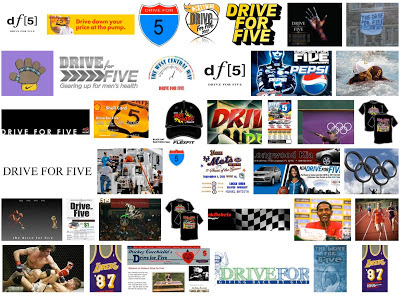 Shell, Pepsi, New York Islanders, and Nike have all used that service/trade mark. I’m not a trademark lawyer, but Shell may contest AbbVie’s registration of the “Drive for Five” trademark. Shell registered this mark in August, 2011, whereas Abbott Labs registered it in April 2012.

Lastly, urging men to know their testosterone levels is another example of how pharmaceutical companies manipulate numbers to suggest that more of us require treatment than would otherwise be the case. How do they do this? By influencing treatment guidelines recommended to physicians by their professional societies such as the Endocrine Society Clinical Practice Guideline for Testosterone Therapy in Adult Men with Androgen Deficiency Syndromes (find it here). Here’s a screen shot of the financial disclosure page of that guideline (click on it for a larger view):

Six out of the seven task force members have received payments from Abbott Laboratories and other pharma companies. According to the Institute of Medicine
(IOM) Standards for Trustworthiness of practice guidelines, none, or at most a small minority, of guideline development group members should have conflicts, including services from which a clinician derives a substantial proportion of income. In particular, says IOM, the chair and co-chair should not have conflicts. Shalender Bhasin, M.D. — the task force chair for the Endocrine Society Clinical Practice Guideline for Testosterone Therapy — received consultation fees from GSK and Merck and research grants and “Other Research Support” from Abbott Laboratories, Ligand, and Merck.

BTW, I notice that the “Drive for Five” gearshift does not have “reverse.” I can only guess why the marketers omitted it. There must have been some “cons” and “pros” expressed by the team. One “con” may have been that “reverse” connotes negativity. A “pro” argument could have been that “reverse” could signify a reversal in the aging process — like regaining energy, libido, etc. Oh wait, that might been interpreted by the FDA as overstating efficacy or promoting “off-label.”