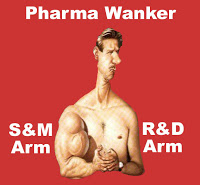 In a video interview with Wall Street Journal, Joseph Jimenez, the CEO of Novartis, said “The industry needs to spend more money on R&D and less on sales and marketing. In the past two decades, a lot of the value creation came from sales and marketing muscles for new drugs. And now there is probably less investment by some companies to ensure that there is going to be a continuous flow of innovation.” Find a partial transcript of that interview and the video here.

I modified an image of the famous “Welsh Wanker” to illustrate the “muscle” analogy suggested by Jimenez. The “S&M Arm” of the “Pharma Wanker” represents the overspending on sales and marketing, whereas the  “R&D Arm” represents the underspending on research and development.

“Wanker,” BTW, is a pejorative term of British origin. It initially referred to “one who masturbates” but has since become a general insult commonly meaning wasting time or, in this case, money.

According to Cegedim Strategic Data, Novartis is among the top 10 (maybe #4 or #5) direct-to-consumer (DTC) spender — not a shabby “Pharma Wanker” as far as Sales & Marketing muscle goes. The chart below shows the top 10 DTC spenders between July 2011 and April 2012. 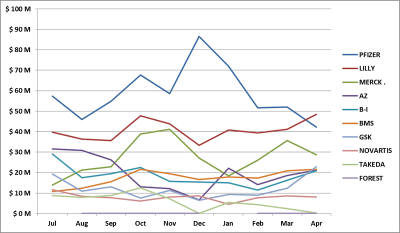 I don’t have data on R&D spending, so I can’t judge the relative muscle size of Novartis’s “R&D Arm” compared to its “S&M Arm.” It remains to be seen, however, whether Novartis will let the latter atrophy a bit and step up development of the former.

In a previous post, I predicted that DTC spending by the pharmaceutical industry in general will decrease agin in 2013 (see “Some Interesting Pharma Predictions for 2013“). When a CEO of a major pharma company says the industry should spend less on sales and marketing, it signals that my prediction may come true in spades!