Back in June, I noted that TBWA took over the alli — GSK’s OTC weight-loss product — account. “This is one of the greatest marketing challenges today,” said an industry executive, who added that Alli has to overcome diet-pill stigmas, a challenging economic climate and lazy human nature — as well as a horrendous side effect (“Side Effects of TBWA Win Include Unpleasant Alli Account”).

Have you noticed that the new alli ads on TV and on the www.myalli.com web site have changed?

The new ads feature testimonials from healthcare providers and consumers who are making product claims that go far beyond what is supported by the clinical trials that the FDA used to approve Xenical, the Rx version of alli. Yet the ads continue to emphasize that alli is the ONLY FDA-approved OTC weight loss product. Taken together, these messages suggest that the exaggerated claims have been approved by the FDA.

In one “real alli story” depicted on the myalli.com web site “Cheryl,” a pharmacist, says “the thing I like about alli is it just blocks the fat in your body…and keeps the fat from being absorbed into your system.” Sounds like Cheryl is claiming that alli blocks ALL fat from being absorbed, whereas alli actually prevents at most 25% of the fat from being absorbed. This fact is displayed in small type on the screen when Cheryl makes her “enhanced” product claim in the voice over. In another part of the ad — when there is no text on the screen — Cheryl the pharmacist repeats that “basically it just blocks the fat that you are eating.” Clearly, if this ad were subject to the same FDA regulations as Rx ads are, the FDA would call GSK out on it.

Cheryl claimed to have lost 25 lbs while taking alli. Not an unreasonable result. Melissa, in another testimonial, claims to have lost 75 lbs and Connie lost 57 lbs. Of course, these are NOT typical results as the small type on the screen points out (it’s virtually impossible to read this type on the Web site versions). Typically, someone taking alli may lose about 1-2 lbs per week. It’s doubtful that Melissa has been taking alli for 37 to 75 months!

Either Melissa was coached or knows more about alli’s mechanism of action than does pharmacist Cheryl, because she was careful to say that alli “takes SOME of the fat that you eat out of your system.” 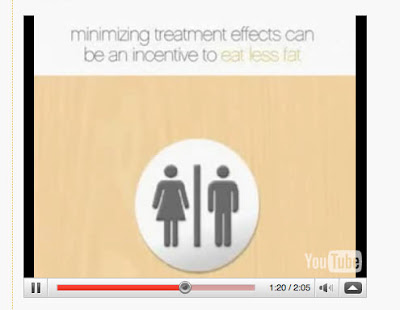 In fact, Jill — in another testimonial — said she experienced one “treatment effect” incident and she learned her lesson! By which she meant: don’t eat so much fat!

This alli-induced “aversion therapy” reminds me of the book/movie Clockwork Orange where Alex is conditioned to throw up whenever he hears the music of Beethoven.

Melissa ended her testimonial by claiming that alli “improved her entire life!”

Jonathan Richman over at Dose of Digital Blog asked pharmaceutical marketers what they would do differently if there were no FDA or FTC rules (see What If There Were No Rules in Pharma Marketing?). One option he gave them in a poll was: make “Enhanced” Product Claims. Only a couple of respondents were honest enough to admit that they would do it (3% of the votes).

“I think everyone here knows that ‘enhancing’ your product claims isn’t a winning strategy,” said Richman. Obviously, GSK and TBWA do not concur. Alli is a great case study of what pharmaceutical companies would do if there were fewer or no FDA regulations to contend with – they would enhance the benefits and downplay the side effects.

Thanks to DTC Cartoon Characters, We Know How Belsomra Works, But...