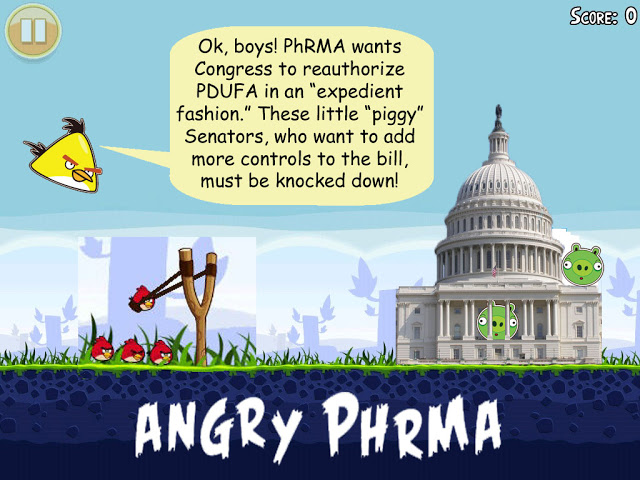 Yesterday I suggested a real “kick-ass” pharma-related game would be ANGRY PHRMA (see “Pharma & Fun, Not Oxymoronic? Here Comes Gamification!“). Below is shown “Level 1: PDUFA,” the goal of which is to “knock down” those Senators trying to give FDA new regulatory powers as part of the bill — or as PhRMA describes it, those “additional provisions that could create unintended burdens on the regulatory process” (see “PhRMA Statement Regarding Prescription Drug User Fee Act Reauthorization“). PhRMA specifically disagrees with REMS because it “has led to a breakdown in FDA’s review process and has eroded some of the positive progress derived from earlier PDUFA agreements” (see “PDUFA 2012 – Background From PhRMA’s Perspective“).

EXTRA CREDIT: Name at least 2 Senators that PhRMA needs to work on.

I’ll try and come up with more levels of play for my ANGRY PHARMA game, but I need your help. Suggest an issue that PhRMA is or needs to be angry about and who the adversaries (little piggies) are. Also, describe the pigs’ fortress that the Angry PhRMA Birds must knock down.

An Analysis of DDMAC Warning Letters Regarding Risk Information in Broadcast...