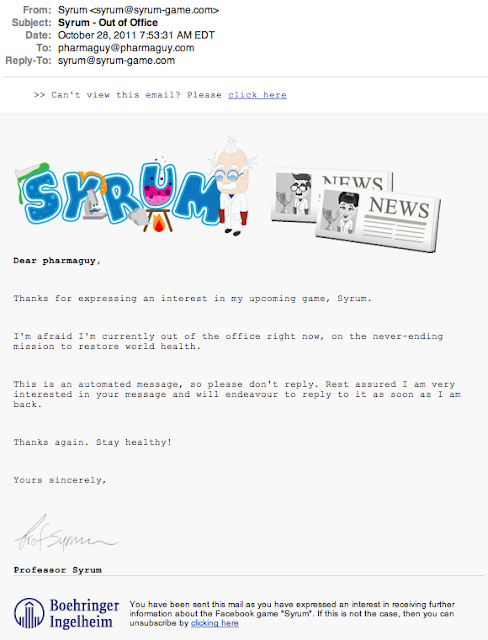 I wrote a review of Boehringer Ingelheim’s (BI’s) long-awaited — but not yet available — Facebook game, Syrum, in yesterday’s post to Pharma Marketing Blog (see “Pharma & Fun, Not Oxymoronic? Here Comes Gamification!“). Today, I brought up the topic of pharma-sponsored “gamification” during the #hcsmeu chat. BI’s John Pugh — who is in charge of the Syrum project — saw the “bat signal” that was raised when the subject of Syrum came up and he joined the conversation.

One question I asked during the chat was “@JohnPugh When is Syrum actually going to be launched? Hope not same schedule as FDA guidelines! :-)” to which John responded: “@pharmaguy Syrum will be launched when its ready, but I expect the first round of testing to be B4 the end of this year.”

Oh, Oh! This sounds suspiciously like FDA’s “promise” to come up with social media guidelines by the “end of the year” (ie, 2010).

So the timeline for the ACTUAL release of Syrum is sometime in 2012 (after 1st round of testing) — maybe even ONE WHOLE YEAR after the game was announced on Facebook! Related to that, I posted this comment to the #hcsmeu chat: “Personally, I’m a little miffed at BI for promoting Syrum so far in advance of its actual launch date! All hype, no substance!”

How can BI justify announcing Syrum on Facebook (and at several industry conference presentations) a year or more before the game is actually available to be played? Hint: note the signup section at the bottom of the screen:

Of course, I signed up. I’m not sure how many other people also signed up, but is this BI’s way of trial ballooning the concept? I mean, will the game be developed only if a certain number of people sign up?

John Pugh suggested that people who wish to beta test the game (me! me! pick me!) should use this form to sign up. I pointed out that the sign up form seems only for people who want to be notified when the game is launched (“Sign up below to be the first to know about the official launch or come back soon… the health of the world depends on it!”).

After signing up, I received the following email message in my SPAM filter/box:

A “Syrum – Out of Office” message? Very odd! What’s BI trying to do here? They are certainly not opening up to communicate with potential game players. I have NEVER received an “out-of-office” email from a pharma company! It shouts to me “We don’t care very much about you.” A pharma company should NEVER send an “out-of-office” reply! First of all such messages may end up ignored or, as in my case, get caught up in spam filters and never seen!

The Syrum site also may violate US and other laws regarding Web sites that may be intended for or used by children under the age of 13 (eg, The Children’s Online Privacy Protection Act (COPPA)). These laws do NOT allow collection of personally-identifiable information from children without the consent of parents. Since Syrum is a game site that John Pugh says is intended for “everyone,” then it is also intended for kids.

I hope that BI will fix these problems as soon as it reads this post. Consider this my first beta test report!

However, there is still the issue of collecting personally-identifiable information from children. BI needs, at least, to add a statement such as “This site is not intended for use by children under the age of 13.”

Google Defends Sidewiki Despite the Fact That It Is Worthless as...