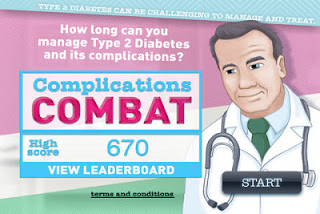 Have you heard that Boehringer Ingelheim (BI) and Lilly have “stepped up their joint efforts to raise awareness of diabetes, launching the new educational game Complications Combat?” (see here).

Of course, I had to be the first kid on the block to try it out. OK, maybe not the first … according to the Leaderboard on the browser version, at least 4 people have tried it. The top 7 scores are owned by “SAI,” whoever that is.

The goal of the game or “task” you must perform is to “effectively manage Type 2 Diabetes and its complications before your patient’s health level deteriorates. The longer your patient stays healthy, the higher your score.” You keep your patient healthy by swiping objects that whiz by into the “Complications” or “Friends” areas. “Friends” include pills and healthy foods, “Complications” include stroke, foot ulcers, etc.

Using the browser version (find it here) on my desktop computer was very challenging. My patient never stayed healthy for longer than 20 seconds and my top score was a weak 210 compared to Leaderboard high of 2830!

I figured it had to do with the difficulty in “swiping” — an iPhone type gesture — using a mouse rather than a touchscreen. So I decided to try the iPad version and followed the link given (this). Unfortunately, the game is “not currently available in the U.S. store, but is available in the Hong Kong store.”

That’s odd! But I soldier on and switch stores and try to download the free game from the Hong Kong store. Whoops! My Apple ID is “only valid for purchases in the U.S. iTunes Store. You will be switched to that Store.”

Ah! Wait a minute… I know what is wrong. If I trace the story, which originally I read in Digital Intelligence Blog (a UK-base publication), back to the source press release from BI (here), I learn that  the Complications Combat  announcement was intended for “For Non-U.S. and Non-UK media.”

BI has a penchant for launching games for non-U.S. audiences (see “BI Launches Official Version of Syrum Facebook Game in U.S.“). Why is that?

OK, so I can’t GET the iPad version of the game. You know what else I don’t GET? I don’t get how this game has any “educational” value. First of all, the objects representing “Complications” and “Friends” whiz by so rapidly that I am not really registering what they represent as much as learning to recognize which ones need to be swiped to the smiley face and which to the frowning face.

There is no summary of your efforts other than a meaningless score. This game could have been MUCH more educational if the summary showed you which objects you swiped to the correct categories and some information about the object’s relationship to type 2 diabetes.

Oh yeah, another point. I take back what I said about scores being meaningless — I want to be up there on the Leaderboard. But if you are going to allow one person to hog the top 7 positions, then that’s just not fair! Give other people a chance to get into the top ten. While you are at it, expand the board to record the top 25 scores. That way, the share button will actually get used and the game has a chance of going viral. Just sayin’