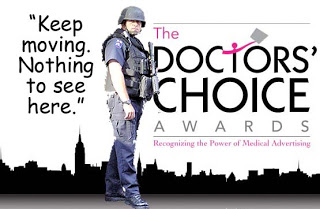 I spent yesterday in New York City attending the 2008 Doctors’ Choice Awards ceremony at the posh Palace Hotel (see my previous post about the awards: “Drug Ads from the Doctor’s Perspective“).

The surrounding area looked like the Green Zone in Baghdad: concrete barricades, police in riot gear, black SUVs, and secret service agents all over the place. No, all this security wasn’t for the protection of Doctors’ Choice award winners. Nor was it was to protect the rich denizens of the upper east side/Park Avenue neighborhood from rioting middle class workers whose life savings were about to be appropriated in the bailout of Wall Street. It was merely related to activity going on at the UN.

Anyway, I was dressed in my best suit and passed through all the security unnoticed as I slipped into the side entrance of the Palace and registered for this well-attended event. I met several friends including James Chase, Editor-in-Chief of Medical Marketing & Media (MM&M). I first met James at MM&M’s own awards ceremony in 2007 (see “Pharma Marketing Blog: MM&M Award Winners Announced at Gala NY Event!“).

James is really a fun guy to party with, as you can see from the photo of the two of us at the MM&M event. But often I cannot tell if he is serious or just kidding around. Like when he mentioned that I called the MM&M’s awards “fixed” in my blog post. Well, I did say this: “Overall, AT [Abelson-Taylor] won 6 awards (2 GOLD and 4 SILVER)! I’m not saying the MM&M Awards are ‘fixed,’ but when one product wins three awards (albeit 2nd place awards), you got to wonder what’s going on. I’ll leave it at that.”

But James should weigh that against all the free publicity and search engine visibility my comments have given the MM&M awards. Search on “James Chase MM&M” on Google and my blog post is #2 in the natural search results ahead of MM&M’s announcement of the 2008 awards, which is #4. Also, if you search Google images, the first one is the photo of me and James at the 2007 MM&M awards ceremony. 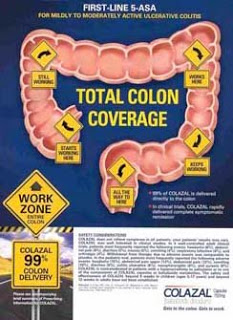 I also met three unassuming guys from MedThink — Walt Clark (Partner), Scott Goudy (Partner), and Sean Frederick (Associate Creative Director). They were dressed casual, did not have business cards, and did not have a full-page ad in the glossy Doctors’ Choice Award book that was handed out to everyone attending.

Despite their unassuming airs, they won two awards: their ad for Colazal — a drug which since has gone generic; see left — won the award in the gastroenterologicals category and the same ad was the overall winner in the one-page category! In my previous post, I mentioned that this ad was my favorite. I sure hope they read this and give me a call so I can pitch them to advertise in Pharma Marketing News!

Meanwhile, Abelson-Taylor, which did have a full-page ad in the book, won two awards — one for Rozerem (of course) and one for Natrecor. In addition, Jay Taylor, AT SVP, gave the keynote address that stunned the audience when he (1) said “we are sitting on a bubble” and (2) teared-up remembering the first patient he treated who died of cancer (Jay was in the last stage of becoming a pharmacist when he quit to go into advertising).

Is It Real or PhotoShopped?
When each award was announced, there was commentary explaining the rationale of the ad design and sometimes a factoid on how it was created. I learned, for example that AT’s Natrecor ad — with the patient on a hospital bed partially submerged in water — was created by actually submerging the bed and actor in water — or so they said. It befit an agency that one presenter said was “steeped in authenticity.”

That lead me to wonder if the ad for Flomax — which shows an iceberg in water — was photographed from a real submarine or just PhotoShopped? The two ads are juxtaposed in the image below: 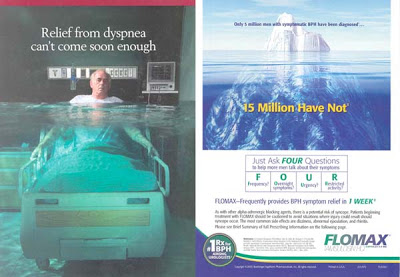 During the presentation of page unit awards, the presenters — Vince Parry (InVentiv Health) and Brendan Ward (Regan Campbell Ward McCann) — had some fun commenting on ads much as I am doing here. I don’t remember who said what, but here are some choice comments they made regarding specific ads:

Meta-Award Analysis
During the ceremony I had an opportunity to chat with James in between his picture-taking, intelligence-gathering sorties into the crowd.

He shared with me some details of MM&M’s award process, which is quite impressive. For example, at least 45 judges are involved, which is quite a bit more than what the FDA has for reviewing DTC broadcast ads. It seems that we could kill two birds with one stone if the judges of these ads also submitted reviews to the FDA for a fee.

Another idea I discussed with James was a meta-analysis of all these award activities, which tend to focus on the same ads. I noticed, for example, that most of the professional ads that were considered for Doctors’ Choice awards could be categorized as either “DTC-like” or “Detail Aid-like.” If the judges (docs in this case) rated each ad according to some numerical scale, then we might learn if docs responded better to DTC-like or Detail Aid-like ads or something else.

Dis RealAge All You Want NY Times, But Consumers Want those...