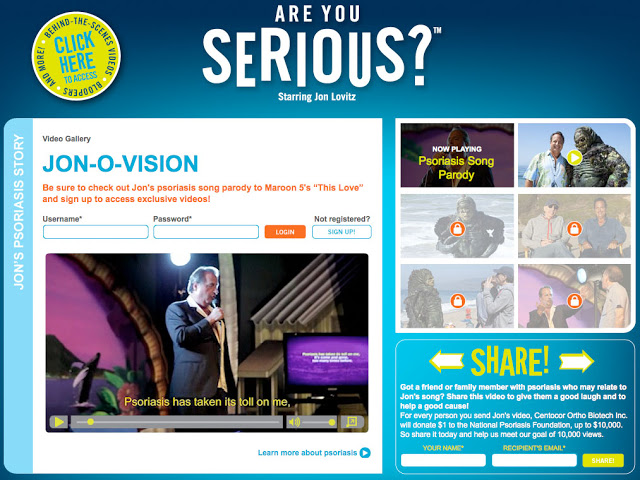 Many pharma marketing experts wonder why pharmaceutical marketers spend approximately 70% of their DTC advertising budgets on expensive TV advertising when they might get better bang for their bucks advertising through other channels such as the Internet.

Whether or not you agree with that, there’s one indisputable factor about TV advertising to consider: the opportunity for brand managers to play at being directors, mingle with the stars, and even to have a “cameo” part in the production.

BTW, J&J IS serious about trademarking “Are You Serious?” Here’s the result of a trademark search I performed (click on image to enlarge):

According to Stoltz, the “renowned Saturday Night Live actor and comedian, Jon Lovitz” called HIM — not the other way around — to pitch the public awareness campaign. Apparently, Lovitz suffered from severe plaque psoriasis for a decade until he found a dermatologist “who knew what the hell he was doing” (according to a song supposedly written by Lovitz as part of the TV campaign. Find it here; see screen shot below).

I guess it’s feasible that Lovitz would pick up the phone himself to call a product manager (er, excuse me, I mean “Director, Product Communications”).

“The campaign is a collaborative educational effort between Centocor Ortho Biotech Inc., maker of two treatments for the management of moderate or severe psoriasis, and the National Psoriasis Foundation (NPF), starring Lovitz. It aims to raise awareness about this autoimmune condition and motivate patients to speak with a dermatologist about how to effectively manage their symptoms. That’s what Lovitz did less than a year ago, and he couldn’t be more passionate about sharing his positive experience with others to let them know they absolutely can take control of their disease.”

Stoltz also admitted that he made a cameo appearance in one of the “behind-the-scenes footage and blooper videos.”

Unfortunately, I opted NOT to view the “behind-the-scenes” videos because it requires registration. Ever since I began covering the issue of online privacy related to healthcare marketing, I am a little afraid to give away personal information to a pharmaceutical company (see “FTC Issues Privacy Report Recommending ‘Do Not Track’ Option“).