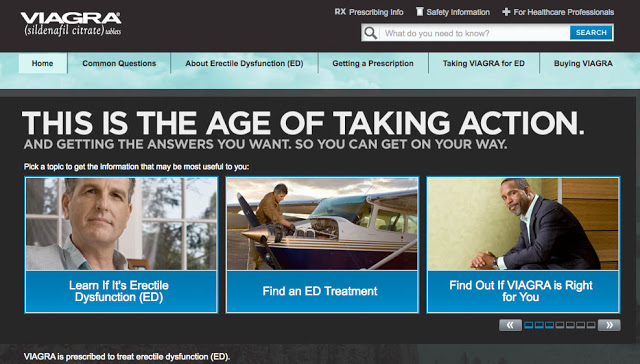 No, Viagra.com hasn’t been the target of “distributed denial of service” attacks by “unknown hackers,” nor has Amazon pulled the site from its servers following political pressure from Senator Joe Lieberman, who chairs the Senate Homeland Security Committee. And Lieberman did NOT call for organizations hosting Viagra.com to terminate their relationship with the website.

All that’s not likely to happen because here in America we value the freedom of information and believe the first amendment applies to corporate speech as well as to individual speech.

But Viagra.com has moved to the dark side and has become the first Rx drug site to use a black background, as far as I am aware (see screen shot below).

Several weeks ago, I noticed a similarly dark Viagra print ad in a magazine (see “Be a Macho Man! Ask Your Doctor for Viagra!“). The Viagra.com web site continues the “macho” theme as well.

Man, I’d love to be like one of these guys! Own a private plane and even know enough to work on its engine as well as not panic when my OLD car’s water temperature gauge goes into the red zone while I’m driving  through the desert! Who knew such guys had ED (erectile dysfunction)?

ED guys don’t have to ask mechanics for help on the road, but they DO have to ask their physicians for help getting an erection (ie, a prescription for Viagra). That’s the best advice Viagra.com can offer!

P.S. Delving a bit deeper into the Viagra.com Web site, I find that “ED is More Common Than You Think” in the “Common Questions” section. There, Pfizer claims that “MORE THAN HALF OF MEN OVER 40 HAVE SOME DEGREE OF ED.” I’ve often taken issue with this statement, so I researched the source that Pfizer cites for this: The Massachusetts Aging Men Study, which found that 52% of respondents claimed they had some degree of ED. Another analysis of this study concluded “Men who worked in blue-collar occupations were one and a half times more likely to develop ED compared to men in white-collar occupations” (see here). So why aren’t blue-collar men depicted in Viagra ads instead of professional-looking guys and guys who own their own private planes? I doubt many blue-collar types are able to afford their own private airplane these days. What kind of world does Pfizer think we live in????

Are you happy to see me, or is that just your...