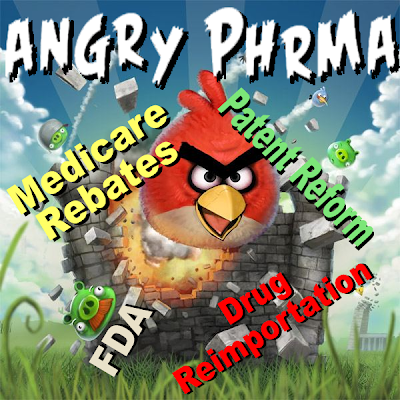 Speaking of Boehringer Ingelheim’s (BI’s) long-awaited — but not yet available — Facebook game, Syrum, John Pugh, head of BI online communications, said it’s about “pharma and fun.” He quickly added “This is not an oxymoron. You can have the two in the same sentence.”

The objective of the game is to “save the world, one disease at a time, by harvesting molecules (a little like Farmville) and then using them as trading cards to play against diseases (a little like Pokemon). A player must first investigate molecular compounds at a research desk before putting them to the test in the laboratory, then conduct clinical trials and, if successful, advance a treatment to market” (see the MM&M review here). You can see a Syrum “trailer” here.

BI’s objective is to create a “kick-ass game,” says Pugh. A game that is for everyone, not just pharma wonks — a game that “different that people will love playing.”

I can’t wait to try out the game and get to the last level, which I presume is “marketing.” I imagine that once I master that level, I will find a pot of gold at the end (maybe not a POT, but I did see a BAG of gold!).

Is this game — or any other game dreamed up by pharma marketers/PR people — really “kick-ass?” Just looking at the 1980’s style graphics makes me think not. Here’s an example (showing the bag-o-gold): 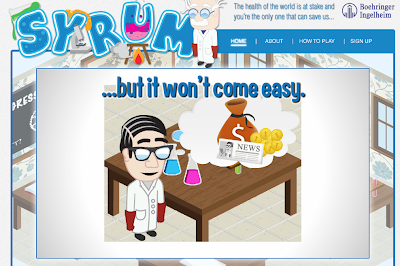 If you really want a “kick-ass” game, first start with a “kick-ass” subject. For example, the pharmaceutical industry is kicking ass public-relations-wise on topics such as Medicare rebates, drug re-importation, patent law reform, and FDA PDUFA. This is a kick-ass fight for survival of the industry.

The second ingredient necessary for creating a “kick-ass” game is “kick-ass” graphics. I don’t have to say much about that except that BI may be limited implementing the game as a Facebook app or maybe it’s a budget issue.

The third ingredient of a truly “kick-ass” game is the ability to create some havoc. Killing terrorists, enemy troops, random pedestrians, etc., is a popular “kick-ass” gaming past-time, but not appropriate for use by the pharma industry. But you got to have “kick-ass” characters actually kicking ass!

So here’s my idea for a “kick-ass” game that PhRMA could sponsor: ANGRY PHRMA!

Is this a game for everyone? Maybe not. I see it as a game for busy pharmaceutical executives to play on their commute to work or while attending boring meetings. The game will adequately inform these executives about the issues and help them bond with their trade association, which is at the forefront of the fight!

The objective of the ANGRY PHRMA game is simply to have fun slinging angry PhRMA birds and knocking over those piggy houses representing anti-pharma issues.  You’re not going to learn much playing this game, especially if you are playing on a small screen like an iPhone. The text would be too small! It’s just mindless, fun mayhem!