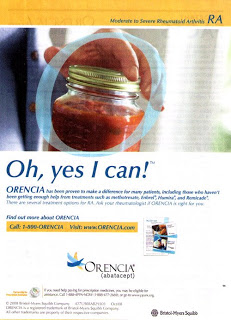 In an ironic twist of advertising art imitating life, I noticed that Bristol-Meyers Squibb (BMS), marketer of the anti-arthritis drug Orencia, has trademarked the phrase “Oh, yes I can!”

The trademarked phrase, which I discovered in an Orencia print ad in this month’s Prevention magazine (see image left), is as close as you can get to president Obama’s “Yes We Can” slogan and speech he made on January 8, 2008 in New Hampshire.

The twist is that BMS trademarked its phrase back in March, 2007, well before Obama’s speech and the music video that followed in February, 2008 (see YouTube video at the end of this post).

I probably have seen this ad and phrase many times before, but it never made an impression on me until now. You might say that the ad’s effectiveness has increased due to Obama becoming president, which is ironic because BMS was a big pharma supporter of Republican party candidates in 2008 (see “Top Pharma Contributors to Federal Candidates and Parties“)!

Now what was McCain’s slogan again?

Images Tell the Story of Pharma in 2016