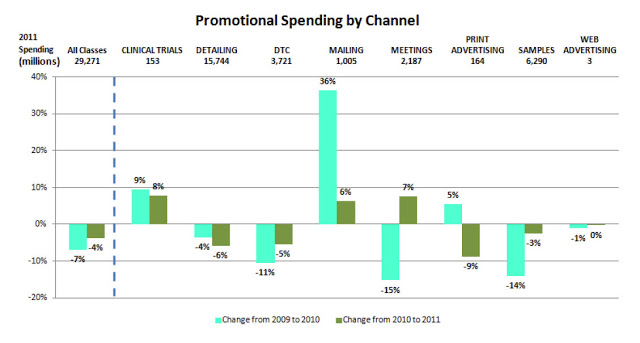 Cegedim Strategic Data (CSD) reports a decline of 3.4% in worldwide audited pharmaceutical marketing investments for 2011 (see “Pharma Marketing Global Spend Dipped 3.4% in 2011“). In China, however, pharma spending on sales rep detailing physicians increased by 23% in 2011 compared to 2010. That activity represents about 81% of the total pharma marketing spend in China compared to 60% globally.

Another type of marketing spend that is “typical” for emerging markets is meetings where physicians are invited to listen to key opinion leaders or specific promotions. In China, meeting spending was up 43% in 2011 vs. 2010. That represents 17% of the total marketing spend in China. Sampling, on the other hand, represents only 1% of the marketing spend, whereas in in the U.S. 21% of pharma’s marketing spend is on samples. Note that CSD costs samples according to Average Wholesaler Cost rather than retail value.

Promotion vs. R&Deja vu all over again!