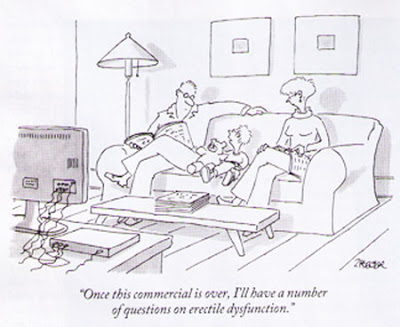 According to IndyStar.com, “Cialis was the seventh-most-advertised drug in the country in 2007, with $152 million spent.”

Although sales of Cialis are down recently — possibly reflecting less discretionary income spending on life-style drugs during this recession — Cialis is catching up to Viagra. Worldwide sales of Cialis last year increased by 26 percent, to $1.4 billion, and Cialis commands nearly one-third of the U.S. market for ED drugs.

The IndyStar article tries to attribute all this good news about Cialis sales to DTC ads for the product, but neglects to mention the recent decrease in sales despite the continued presence of these ads on TV. In fact, the advertising for Cialis seems to have increased over the last several months.

Perhaps the decrease in Cialis sales Q1-2009 v. Q4-2008 would have been much worse were it not for the advertising, which leads me to wonder if cutting back on DTC advertising during a recession is a good idea for pharma companies. Alas, we can never be sure what influence DTC advertising has on sales.