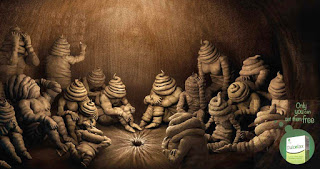 Are you constipated? Well, if it’s caused by your opioid pain medication, you might need prescription Movantik (read “Cam Newton Was Not the Only One ‘Blocked’ During Super Bowl 50“).But if it’s just run of the mill “occasional constipation,” you might try an over-the-counter product such as Dulcolax Laxative by Boehringer Ingelheim.

I recently came across a Dulcolax print ad,  which ran in Singapore newspapers and bus shelters and which was on a 2014 shortlist under the outdoor category at Lions Health (read “Pharma Advertising is So Bad It Has No Big Winner at Cannes Lions Health 2014“).

Yep! It’s a view of turds (Scheisse) trapped inside an A-hole! The tagline — along with a photo of a Dulcolax Laxative package — is expressed in a turd’s thought balloon: “Only you can set them free”.

As is often the case with OTC drug ads, the “Desperate Turds” ad misrepresents the effectiveness of Dulcolax Laxative to treat occasional constipation.

One turd in the ad is keeping track of the number of days s/he and other turd inmates have been “locked up” inside the A-hole. From the looks of it, these turds have been trapped for well over 40 days and 40 nights, assuming each tick mark represents one day. In that case, taking an OTC laxative won’t set these turds free as is implied by the ad. The Dulcolax Laxative website clearly states: “Constipation isn’t usually a serious problem; however, if you need to use a laxative for more than 1 week, you should consult your doctor.”

But who knows how turds measure time and how they determine when one day-night cycle has passed! Perhaps each tick mark represents just one hour.

In any case, “Desperate Turds” deserves a place in my Gallery of Drug Advertising Mascots:

When is it Acceptable for Pharma Marketers to Use Behavioral Targeting?