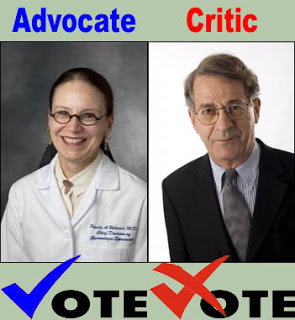 I learned today that the FDA allowed physicians with ties to Bayer to participate and vote in an advisory committee weighing whether or not the benefits of four popular Bayer AG birth-control pills outweigh the blood-clot risk (read the WSJ story here: “FDA Advisory Committee Members Had Ties to Bayer“).

At least one of the physicians (Paula Hillard, Stanford Univ; see her financial disclosure info here) was a Yasmin advocate. According to a Bayer document released during litigation, Hillard “enable[d] us [Bayer] to now have another huge … Yasmin advocate here in Nor Cal — she will be well utilized!”

Hillard, the advocate, was allowed to vote on the issue.

In the same story, it was noted that drug-safety crusader Sidney Wolfe — who was appointed to a four-year term on the FDA’s Drug Safety and Risk Management Committee (see “Wolf(e) at DTC Piggy’s Door Huffing and Puffing“) — was NOT allowed to vote “because he had publicly criticized the drugs’ safety in newsletters published by his Public Citizen Health Research Group.”

This little excerpt from the WSJ article is also interesting:

The FDA says members of the public speaking before advisory committees must declare any financial relationships to the relevant drug maker, to “ensure … transparency.” However, committee members must disclose potential conflicts only to the FDA, which doesn’t generally make the information public.

Jill Hartzler Warner, an FDA official who oversees advisory committees, said the agency is “prohibited from giving the public any information contained in a financial disclosure” from committee members. When picking committees, the FDA weighs “whether a meeting would affect the financial interest” of a panelist. The agency also does “look at whether past relationships would give the appearance of being a conflict,” she said.

I was not aware that the FDA is “prohibited” from supplying information contained in financial disclosures, but it may be a moot point in a year or so when the physician sunshine act is in full effect and all payments to physicians are made public. We’ll just have to wait for that and do our own research. Still, with FDA’s double standard regarding voting privileges, it won’t much matter how much transparency there is in who serves on these committees!

P.S. For more on how the FDA determines whether or not a physician’s financial conflicts disqualifies him or her from serving on FDA advisory committees, see “FDA Advisor Rule Loophole?” where you’ll find a complex chart depicting FDA’s “Algorithm for Considering Advisory Committee Member Participation.”

P.P. S. For some more background on Wolfe vs FDA regarding Wolfe’s participation in this committee, read “FDA Pulls Wolfe Off Panel Over ‘Intellectual’ Conflict” (Pharmalot).

Can You Read This “Fair Balance” on Race With Insulin Twitter...