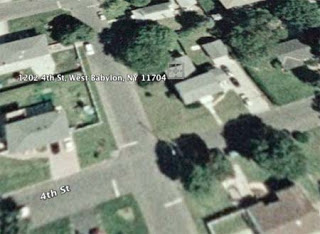 “You don’t tug on Superman’s cape,” says Jim Croce, and you don’t mess around with Pfizer! That’s a lesson some guys from West Babylon, NY (ie, Long Island) learned when they parked a missile emblazoned with the Viva Viagra logo in front of the Pfizer headquarters in NYC (see Pharmalot for the story about the lawsuit Pfizer has initiated against the West Babylon guys).

The “guys from West Babylon” actually have a company called JetAngel, which intends to put logos on a number of different types of military ordinance. JetAngel’s concept “takes the target marketing capabilities of mobile billboards and adds an experience for consumers to achieve the ultimate viewer captivation. It is a new, non-traditional outdoor medium that has no competition. We can capture the consumer’s attention and engage them one-on-one with an advertising message that has proven to provide a positive reaction.” 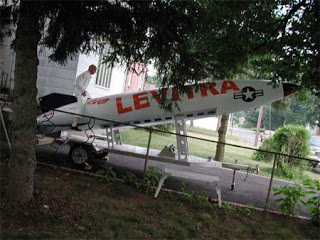 The company’s quaint website is chock full of images of military projectiles parked in a West Babylon backyard. But you won’t find the Viva Viagra missile among them.

Instead, I found this Levitra missile appropriately displayed attached to one of the guys (see image on left). Bayer, which markets Levitra, is no Superman in the pharmaceutical pantheon and that may explain the switcheroo. Or perhaps these guys are geniuses of word-of-mouth litigation marketing!

JetAngel’s “Corporate Offices”
When I first saw this and other photos on the JetAngel website, I was sure the location was somewhere on Long Island, maybe even Brooklyn, NY, where I lived as a kid. West Babylon is not that far off.

Just for fun, I located JetAngel’s “Corporate Offices” using Google Earth and just as I suspected, it is located in a middle-class suburban residential neighborhood.

I wonder what JetAngel’s neighbors think of all the missiles and other projectiles parked next door? The guys from West Babylon may have many more lawsuits to contend with before they make any money from their “new, non-traditional outdoor medium that has no competition.”

Sung to the tune of “You Don’t Mess Around With Jim”:

Uptown got its hustlers
Bowery got its bums
And 42nd street got big Pfizer Pharma
It’s a pill poppin’ son of a gun
Ya, it’s big and dumb as a drug company can come
But stronger than a suburban backhoe
And when the bad marketing folks all get together at night
You know they all call big Pfizer’s ceo, just because, and they say

Well out of West Babyon come a suburban guy
He said, “I’m looking for a company named Pfizer
I am a pill poppin’ ad boy, my name is JetAngel, the real OOH McCoy
And I’m looking for the king of 42nd street
Last week he took all my mom’s money, and it may sound funny
But I’ve come to get her money back in advertising,” and everybody said, Jack, don’t you know