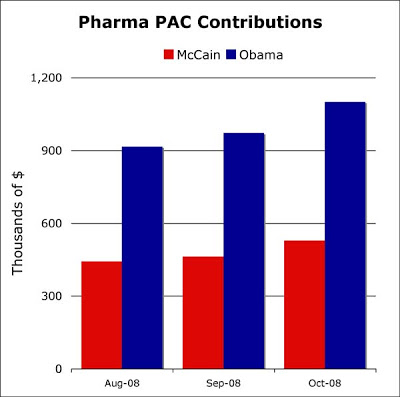 Now, however, the pharma PACs seem to be trying to play catchup. For the period between September 29 and September 2, PAC contributions to McCain increased 14.1%, whereas contributions to Obama increased only 13.2%. That’s not much of a differential, but it’s a reversal of trend that may signal a shift toward McCain by pharma folk?

Is Obama better for pharma? What do YOU think? Who do you intend to vote for?

If you haven’t given me your opinion on Obama vs. McCain yet, please take 2 minutes to respond to the survey, which you can find here. If you have already taken the survey and wish to change your response (especially if you were undecided before and have now made up your mind who to vote for), you can go back and change your response as long as you are using the same computer and have not deleted cookies.

As always, you can remain anonymous or you can identify yourself if you wish to be quoted in a Pharma Marketing News article I plan to write for the October, 2008 issue. I keep all comments confidential and, if I quote someone, I always let them review it before publication.

Will a Pharma Company Ever “Host” a Chat on Twitter?