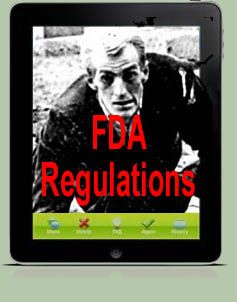 In a blog post provocatively titled “An App for That, But For How Much Longer?” (here), PhRMA’s Kate Connors agreed with a Washington Times op-ed piece that suggested the FDA will soon require apps such as medication prescription renewal reminders and blood glucose level tracking functions to be regulated as medical devices. You can read the op-ed in this threaded archive: “How safe is that app? Should pharma apps be registered as medical devices?“.

Before I get to destroying the case made by Connors and White, I should point out how these two people are related. White is the president of JC White Consulting, a registered lobbying firm (see here) retained by the Health IT Now Coalition and PhRMA, among others (see here). In her blog post, Connors said “A few days ago, I missed an op-ed in the Washington Times that I just came across today – and I’m glad I did.” Joel, you should have DM’d Kate! Whatever! It’s nice that White gets paid to write this “independent” op-ed piece that PhRMA can cite as if it were independent! Guys! Wake up! It’s the era of transparency! Unfortunately, you can fool some — maybe even most — of the people all of the time and that is what keeps PhRMA in business.

Anyway, back to “FDA Mobile Regulatory Fear Mongering.” I say “fear mongering” because it can’t be true that White and Connors failed to read FDA’s July guidance in which it stated that the agency does NOT consider the following types of apps to be mobile medical apps for purposes of the guidance:

“Mobile apps that are solely used to log, record, track, evaluate, or make decisions or suggestions related to developing or maintaining general health and wellness. Such decisions, suggestions, or recommendations are not intended for curing, treating, seeking treatment for mitigating, or diagnosing a specific disease, disorder, patient state, or any specific, identifiable health condition. Examples of these apps include dietary tracking logs, appointment reminders, dietary suggestions based on a calorie counter, posture suggestions, exercise suggestions, or similar decision tools that generally relate to a healthy lifestyle and wellness.”

PhRMA/White do not quote FDA because to do so — as I just did — would kill the argument that FDA mobile guideline/regulations will stymie pharma from developing apps and will “hinder the way that patients can actively improve their own care.” You should also read “No, the FDA is not assaulting mobile technology, Washington Times editorial misguided” published by iMedicalApps.

Meanwhile, there are medical apps being created by pharma that SHOULD be regulated by the FDA, IMHO. These are “calculator” apps designed to be used by physicians during diagnoses. One such app had to be “recalled” because of a bug that generated incorrect results. Unfortunately, thousands of physicians may not have heard of the “recall,” which merely removed the app from app stores, not from the phones of physicians who downloaded the app. These physicians may still be using the buggy app. See “The Problem with Unregulated ‘Calculator’ Apps for Physicians: Buggy Software!“

Just for fun, I signed up to receive reminders. I was, however, somewhat put off by the long legal disclaimer, which said, in part:

ROTFL! In essence, PhRMA says it makes no promises that this app will be useful. How is this supposed to help me improve my care if PhRMA does not even care to fix errors or deficiencies? Not a very consumer-friendly attitude, I must say! BTW, I am sure the FDA did NOT require PhRMA to write that.