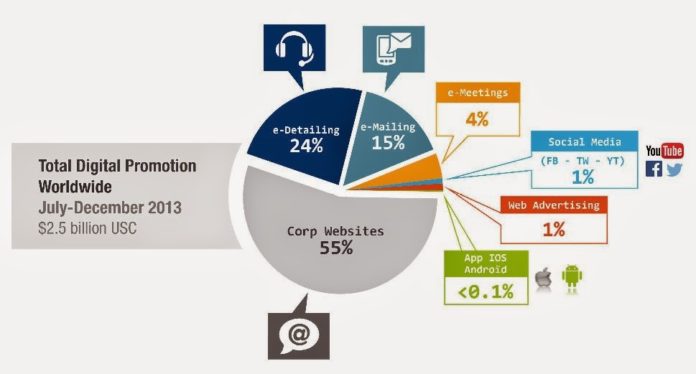 That works out to be approximately 6% of the total audited marketing expenditure, which includes “traditional, personal promotional channels;” i.e., sales reps.

NOTE: I am uncertain if this CSD audit includes direct-to-consumer (DTC) promotional spending, which is only legal in the U.S. Also, keep in mind how CSD estimates these numbers; i..e., by polling thousands of physicians.

While the total expenditure remained flat, spending on some digital channels — i.e., e-detailing, e-mailing and e-meetings — was up over 14% in 2013 versus 2012. The total spend for these channels in 2013 was $1.9 billion, according to Cegedim Strategic Data.

Every year, audits like this one claim that digital spending by the pharmaceutical industry is increasing in absolute dollars (see, for example, “Will 2013 Be the Year of ‘Digital Pharma?’“). Yet expressed as a percentage of the total promotional spend, digital’s share always hovers around 5% or 6% — even when spending as a whole remains flat as in this case! How can that be? [See comments to this post from Christopher Wooden, VP Global Promotion Audits, Cegedim, for his explanation.]

In any case, let’s look at the breakdown of the total digital spend by pharma according to CSD. The following chart tells the story:

A reader asks: “Have you seen any stats on pharma spend for HCP email?” My answer: “Maybe.”

The CSD chart above indicates that 15% of pharma’s $2.5 billion digital spend in Q3-Q4 2013 went to “e-Mailing.” That comes to $750 million per year. I assume that this includes only promotional e-mails sent to physicians. I say that because I don’t think Cegedim’s physicians can estimate the amount of e-mail pharma sends to consumers. I’ll have to get clarification regarding that.

UPDATE: Christppher Wooden, Vice President, Global Sales at Cegedim Strategic Data, responded via email (and comments to this post) that these data DO include U.S. DTC promotion (which CSD “sources from Neilsen in the US”) and “e-Mailing” only includes e-mail promotions to physicians, nurses, and pharmacists – no consumers.