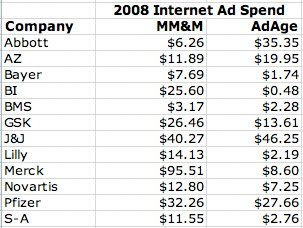 Depending upon what publication reports the data, the TOP 12 pharma companies either spent $287.60 or $168.12 million on “ePromotion” in 2008. The two publications I am talking about are Medical Marketing & Media (MM&M; see “Pharma Report: When Generics Attack“) and AdAge (see “Marketing Mix of Leading Pharma Advertisers in 2008“). The “measured media” DTC data reproduced in these publications come from the same source: TNS, which is now part of Kantar Health.

I focus on the 2008 data because I don’t have 2009 data from AdAge, but I DO have 2009 data from the May 2010 issue of MM&M, which reported promotional spending in several categories: DTC, detailing, ePromotion, meetings, and journal advertising. Some of the data — it’s not clear which data — come from SDI’s Promotional Audit.

The 2009 data reported in MM&M covers the TOP 20 pharma companies in terms of “Total Promo Spend” (see chart below, which shows the Detailing, DTC, and ePromotion spend for the 20 companies; not included are the data for meetings and journal advertising; click on the chart for an enlarged view): 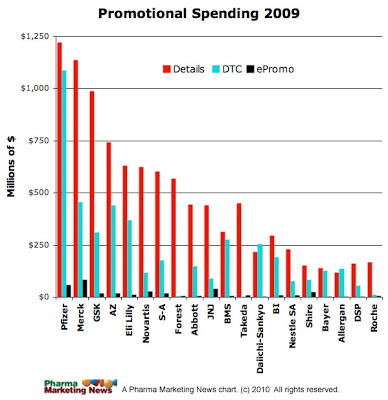 What’s immediately evident is how LITTLE each company spends on “ePromotion,” which — I assume — includes only display ads placed on 3rd-party Web sites and specifically not search advertising. This is part of what’s called “measured” media spending, which many experts say overstates the actual amount that companies spend on advertising — because of discounting. Let’s not worry about that because discounts probably apply to both types of media.

The 7.2% figure is suspect. Measured media data reported in AdAge (“Marketing Mix of Leading Pharma Advertisers in 2008“) indicate that Internet display ad spending was 2.4% of total measured media spending in 2008 and 3.1% in 2007. Unless I am missing some data from the MM&M source or made an error in math, I don’t see how you can go from 2.4% to 7.4% in one year.

The other thing I notice from the data reported in MM&M (see chart) is that some companies spend nearly as much or more on DTC as they do on detailing to physicians (eg, Pfizer, BMS, Amgen, BI, and Daiichi-Sankyo). If true, that’s pretty amazing. Amazing, because I’ve seen estimates of physician detail spending of $12 billion industrywide, whereas overall DTC spending is more in the range of $4-5 billion. That yields a Detailing/DTC spending ratio of about 3 to 1. For the biggest spender — ie, Pfizer — to have a Detailing/DTC ratio of 1.12 to 1 (based on data reported by MM&M; ie, $1.223 Bn/$1.089 Bn) seems very suspect to me.

I have more suspicions about the data reported in MM&M. In the case of Daiichi-Sankyo, for example, when you add up the columns (ie, different types of promotion) you get $554.50 million, whereas the table has $300.75 million in the Total column.

Let’s get back to comparing 2008 ePromotion pharma spending reported in AdAge vs the spending calculated from data reported in MM&M. These numbers are very different for most of the companies on the two lists. Again, I am comparing data for 2008. To do that, I used the % change reported in MM&M to calculate the ePromotion spend for 2008 from the 2009 data. This calculation for Merck, for example, yields $95.5 million whereas AdAge reported that Merck spent only $8.60 on ePromotion (Internet display ads) in 2008 — a difference of $86.9 million! Anyway, here are the numbers (note:for the AdAge data I merged SP data into Merck and Wyeth data into Pfizer to account for mergers after 2008 and to make a fair comparison to what MM&M reported; 2008 data from MM&M were calculated from % change information published in MM&M):

What can account for the huge differences seen for many companies on this list? There must be a mistake somewhere — as I said, I may have made a mistake in my math or assumptions. But I know for sure that there is at least one error in the MM&M table — the data for Daiichi-Sankyo just doesn’t add up to the total reported.

Bob Harrell commented on my Facebook page: “Are you sure the definition of “ePromotion” in either or both cases is *really just* online display advertising (basically banner ads)? That seems like a very odd and narrow definition to use for ePromotion in pharma – putting aside the question of what can easily be tracked/indexed – and thus a questionable assumption for your comments above.”

The source of the ePromotion numbers reported in MM&M (Table 4) is “SDI’s ePromtion Audit,” which I now have learned “tracks online promotional activities for physicians” (see “SDI Reports: Pharmaceutical Promotional Spending Indicates Trend Toward Electronic and Online…“). This would explain the inconsistencies I calculated in the table above. It would not explain, however, what the the level of ePromotion to consumers is.

SDI noted an increase of more than 32% in industry spending on ePromotion (to physicians). Kelly Sborlini, Vice President of Market Research Audits at SDI said “we’re also seeing a similar shift in pharmaceutical direct-to-consumer advertising. The largest growth area in DTC advertising is on the Internet, whereas spending on consumer magazine print ads is decreasing.” I cannot find the numbers that SDI used to support this statement.