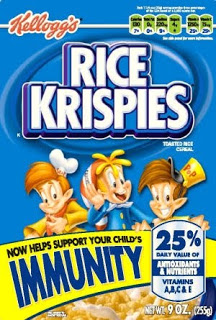 “Leading cereal maker Kellogg Company has agreed to new advertising restrictions to resolve a Federal Trade Commission (FTC) investigation into questionable immunity-related claims for Rice Krispies cereal,” said FTC in a press release (see “FTC Investigation of Rice Krispies Ad Claims“). “This is the second time in the last year that the FTC has taken action against the company.”

What’s disturbing is the fact that Kellog went ahead with its questionable Rice Krispies campaign while being investigated by the FTC for other “cereal” health claims:

“We are concerned that while Kellogg was developing its questionable Rice Krispies campaign last year, it was simultaneously negotiating with the FTC to resolve earlier allegations that the company had deceptively marketed Frosted Mini-Wheats as improving children’s attentiveness,” said FTC Commissioner Julie Brill and Chairman Jon Leibowitz in a concurring statement. “What is particularly disconcerting to us,” said Brill and Leibowitz, “is that at the same time that Kellogg was making promises to the Commission regarding Frosted Mini-Wheats, the company was preparing to make problematic claims about Rice Krispies.”

This makes Kellogg a “serial” misbehaving “cereal” advertiser, if you get my drift.

Can an In-home Electronic Pillbox Solve Our Medication Error Problem?