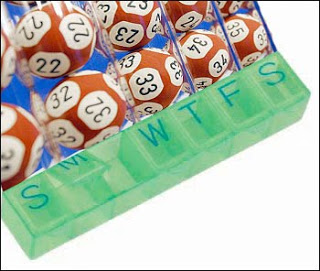 New England Healthcare Institute (NEHI), a nonprofit research organization with ties to the pharmaceutical industry, health insurers and academia, estimates that one third to one half of all patients in the U.S. do not take their medications as prescribed by their doctors. [Actually, regarding that percentage, NEHI may be quoting the World Health Organization, which may be getting its figures from the pharmaceutical industry, which may just be making them up.]

“Adherence” is the technical term used by the pharma industry for “following doctor’s orders” about taking medication. NEHI suggests many reasons for the poor “adherence” behavior of Americans, including:

“In general,” says NEHI, “adherence rates are lower among patients with chronic conditions than among those with acute conditions.” NEHI estimates poor adherence poses an increased risk of hospitalizations due to poor health outcomes, resulting in significant excess costs that are passed along to everyone via higher insurance/co-pay rates. “Since a full 75 percent of U.S. health care spending goes to the treatment of chronic disease, poor medication adherence presents a serious roadblock to efforts to improve health care efficiency and affordability.”

Not to mention the roadblock to increased pharma industry profits!

There have been many strategies to overcome poor adherence. Drug companies, for example, have incentive programs that include coupons for the partial or total re-imbursement of copayments.

A new strategy embraced by pharmaceutical companies, pharmacies and insurers, reported today in the New York Times, is a lottery whereby patients can win cash for taking their medication! “In a Philadelphia program people prescribed warfarin, an anti-blood-clot medication, can win $10 or $100 each day they take the drug,” reported the NYT (see “Cash Helps the Medicine Go Down“). The program uses a computerized pillbox to record if patients took the medicine and whether they won that day.

First of all, no computerized pillbox can actually know if patients swallowed the pill or merely threw it down the drain, which they might do if non-adherence was due primarily to bad side effects. For more about electronic pill boxes, see, “Can an In-home Electronic Pillbox Solve Our Medication Error Problem?”

You can, however, place an electronic collar around patients’ necks and detect if specially-designed pills were actually swallowed. As if that will ever happen! (See “Invasive Compliance: A Bitter Pill to Swallow.”)

Aside from gaming the system by throwing the pill down the drain, the lottery idea is intriguing. It is well-suited to the American psyche, which now expects bad behavior to be rewarded (as in getting great refinancing deals and government subsidies when you decide not to make your monthly mortgage payments). You can also look at this as rewarding good behavior, except I suspect that those patients who prudently have taken their medication all along are not included in such incentive programs.

I am waiting for such a program to be offered to the millions of men who suffer from erectile dysfunction and who “forget” to take their daily dose of Cialis! When that happens, I’ll be the first to sign up!

My “Ice Bucket” Challenge: Donate to a Different Cause to Improve...