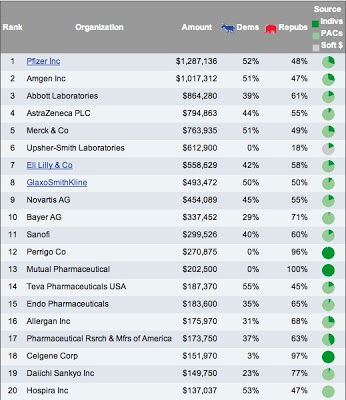 According to data reported by the Center for Responsive Politics, the pharmaceutical manufacturing sector has contributed nearly $12 million during the 2012 election cycle to federal candidates, parties, and outside groups (PACs). Fifty-eight percent (58%) of that went to Republicans. 61% of the funds came from PACs and 33% came from individuals. Around this time during the 2008 election cycle, the drug industry donated slightly more than $16 million, of which 51% went to Republicans.

NOTE: “The numbers on this page are based on contributions from PACs, soft money donors, and individuals giving $200 or more. (Only those groups giving $5,000 or more are listed here. Soft money applies only to cycles 1992-2002.) In many cases, the organizations themselves did not donate; rather the money came from the organization’s PAC, its individual members or employees or owners, and those individuals’ immediate families. Organization totals include subsidiaries and affiliates.”

Here are the Top 20 pharma contributors in this cycle (click on image for an enlarged view):

To make it easier to see which pharma company employees/PACs are “Republican” and which are “Democrat,” I prepared this chart from the table above (click on image for an enlarged view). 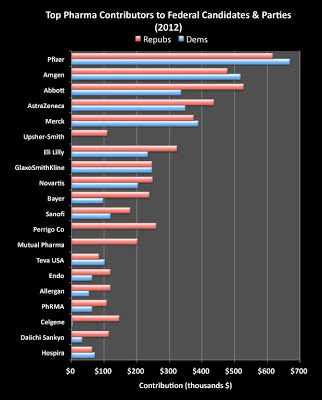