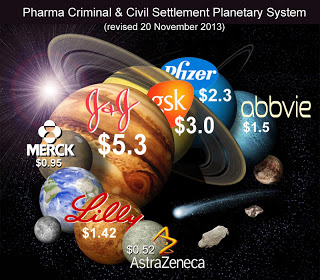 Johnson and Johnson (J&J) and its subsidiary companies Janssen Pharmaceuticals and Scios Inc. have agreed to pay more than $2.2 billion in fines for inappropriately, and in some cases illegally, promoting prescription drugs (see here). [UPDATED 20-NOV-2013]: In addition, according to the Wall Street Journal (here) J&J “agreed to pay about $2.5 billion to resolve thousands of lawsuits filed by patients who allege they were hurt by some of the health-product maker’s artificial hips… One person familiar with the settlement talks said J&J will pay off liens costing around $60,000 to $75,000 for each patient; the liens were taken by government health plans like Medicare and private insurers while covering the medical costs of the patients, and could amount to an additional $600 million, the person said. These payments weren’t part of the resolution announced Tuesday [19-NOV-2013].”

That’s a total of over $5.3 Billion in fines and settlement fees, which may represent as much as one-third of J&J’s annual profits!

As a consequence of this news, the Pharmaguy “Pharma Criminal & Civil Settlement Planetary System” poster is updated AGAIN [19-NOV-2013] to illustrate the seven highest multi-million/billion dollar settlements that drug companies have agreed to pay federal and state authorities for inappropriately, and in some cases illegally, promoting prescription drugs.

Meanwhile, how much is Alex Gorsky, Chief Executive Officer of J&J, responsible for illegally marketing Risperdal for use in children and the elderly — an illegal activity cited in the DOJ case?

Gorsky was the Vice President of Sales and Marketing and then President of J&J’s Janssen unit during the late 1990s and early 2000s, the time period covered by the United States’ Complaint. As reported previously (see “Will J&J’s Gorsky Plead the 5th?“), “Gorksy should know a thing or two.” According to the DOJ, Gorksy was the “go-to guy” when it came to illegal kickbacks made to nursing home pharmacies for prescribing Risperdal, and “no one else possesses the same level of knowledge.”

Recently, I published a fake telephone call between Gorsky and Attorney General Eric Holder in which Gorsky tries to negotiate a lower fine with the DOJ (see “How J&J’s Alex Gorsky Tried to Negotiate a Smaller DOJ Fine“). Could it be possible, however, that DOJ and Gorsky actually negotiated these settlements in such a way as to keep Gorsky insulated from criminal charges? There may have even been one or two phone calls between Gorsky and Holder to discuss this. One such call might have gone like this:

Gorsky: Let me tell you the reason I’m calling. I’m a little concerned about some . . . criminal charges stuff. Like, that maybe you guys are thinking of, uh, bringing criminal charges against ME personally.

Gorsky: Huh. And this is something you feel strongly about?

Gorsky: I see. And you have, like, evidence and stuff?

Holder: I can’t really talk about that, but yeah . . . like, boatloads.

Gorsky: I was talking with some of the guys here and we were thinking, like, a Billion maybe would be good. Do you think that would be a good number? Without charging me with a felony or even a misdemeanor, that is.

Gorsky: Oh. What were you thinking, hypothetically?

Holder: Hypothetically? Not less than FIVE to SIX Billion, including federal and state lawsuits.

Gorsky: Yikes! Does it really have to be that much? If it were say $3.1 Billion, it would be the highest fine paid by a pharma company to the US government and it would give you great creds.

Holder: That’s true, but we can’t forget the states. Tell you what, let’s announce a 2.2 Billion settlement against J&J for drug-related violations and later announce a $2.5 billion fine to settle the device violations without a hint of an extra lien of $0.6 Billion to cover Medicare/Medicaid liens. The $2.2 Billion figure would include $1.6 Billion against Janssen… but we’ll hide that in the details so it won’t look so bad for you who used to be President of Janssen.

Gorsky: Whew! Convoluted! O.K., then. Well . . . I should probably talk with my lawyers.

Holder: Yes, you talk to your lawyers.

[Note: This is the SECOND updated version of this post. The first version reported that Janssen would pay $1.6 Bn IN ADDITION to the announced $2.2 Billion reported previously. The second update corrected an erroneous additional $4 Billion settlement to $2.5 Billion as noted in this post. Sorry for the confusion. It’s difficult keeping up with ALL the legal issues swirling around J&J these days!]

Lunesta Moth Being Mothballed as a Result of Negative Marketing ROI