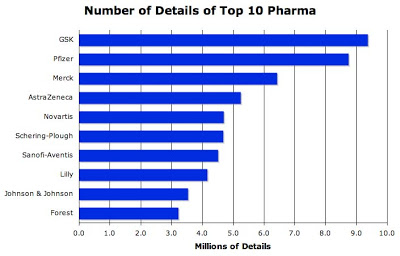 We all know about pharmaceutical sales reps being laid (off, that is). Like you, I assumed that these layoffs would save pharmaceutical companies oodles of money. It turns out, however, that while the number of sales reps has declined in recent years, the drug industry may actually be spending more money than before to maintain fewer reps in the field!

How is this possible?

Simple. The increase in sales rep compensation more than offset the savings from laying off reps. It seems like lower-paid, under-performing reps are first to go.

A short while ago, I reported that the average pharmaceutical sales rep earned $94,200 in total compensation in 2007, compared with $87,500 in 2006. This was an estimate made by the National Association of Pharmaceutical Sales Representatives (see “‘Friendly’ Pharma Sales Reps Earn More Bucks with Fewer Sales Calls!“).

In the November, 2008 issue of MM&M I found a chart in an article on closed-loop marketing that quantifies the recent decline of pharmaceutical sales reps (see below). 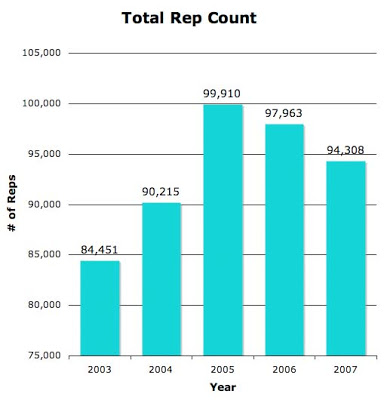 As I pointed out in the post cited above, reps are making 11% LESS details while getting 7.1% higher compensation! No wonder the drug industry is looking to technology like closed-loop marketing (see Pharma Marketing News reprint #73-04).

Speaking of details, a table in the MM&M article cited above reported that the total number of pharma details in 2008 was 92.93 million (see chart below for # of details of the top 10 pharma companies).

A question I’m often asked is How much does a sales rep call cost?

Over at Pharma Marketing Forums, I once tried to get an estimate of the total cost of a sales rep call (see “What Is Average Cost of Sales Call?“). A poll of readers of that discussion thread suggested the cost was somewhere between $201 and $500 per rep sales call.

I welcome feedback from readers on my math.