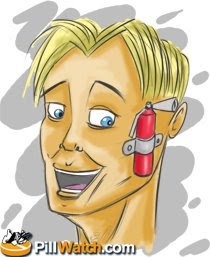 Free drug samples that pharmaceutical sales reps give to physicians are supposed to help patients who cannot afford the prescription and/or to test if the product works on a particular patient.

Of course, we all know that free samples are the drug rep’s last great hope of gaining access to physicians after the distribution of freebies — pens, calendars, clocks, etc. — comes into disfavor on January 1, 2009.

It’s not clear whether or not free drug samples help uninsured patients afford their medication (see “Drug Samples: To those that have, it shall be given. The rest pay list price!“), but what IS clear is that many physicians and their office personnel divert free drug samples for their own use. Such diversion is unethical and may even be illegal.

How do I know this happens? For one thing, it is often discussed at industry conferences I attend. But it is never suggested that sales reps encourage the practice.

Today, however, I witnessed a Pfizer Relpax rep actually leave samples of his product with my physician’s office receptionist and tell her it was for the doctor’s own personal use.

Readers of Pharma Marketing Blog may recall that I often practice the art of sales rep watching while at my GP’s office (see “Basics of Sales Rep Watching“). Today was a good day for this.

But little did I realize when I walked into my doctor’s office for a routine blood test and flu shot that I would witness a possible crime being committed by a Pfizer sales rep.

The rep was new at the job or this territory — this was only his second or third visit to my doctor’s office. He was older — not the typical fresh-faced youngster I often see there. Maybe that’s why the receptionist at first rejected him with what I thought was a totally made up excuse: the doctor had a migraine headache and asked that all reps come back next week when she would be feeling better.

Maybe the receptionist didn’t recognize the rep because he was new to her or maybe she did not see his name tag, which clearly identified him as a Relpax rep. Or maybe she just didn’t know what the hell Relpax was. Whatever. Her excuse, however, opened up a door for the Relpax rep to walk straight through, figuratively speaking.

“Oh that’s so terrible,” said the rep. “But I would feel so guilty if I left without leaving these samples for the doctor. It would be like leaving the scene of a fire with a fire extinguisher. I know she’ll feel better afterward.”

Clearly, the guy was suggesting that the samples were for the doctor’s personal use.

He was then welcomed to leave the samples and wait for the doc’s signature!

BTW, I noticed that there were no Replax tchotkes in the office, nor Pfizer-sponsored migraine patient pamphlets. I did notice, however, GSK migraine patient education material and promotions. I wonder if my doc will switch from Imitrex — GSK’s migraine product — to Relpax for her personal use? Such personal use, however, isn’t likely to increase her Relpax prescribing, which assuredly is unbiased by samples she may have used to treat herself!

Interestingly, I was able to find the fire extinguisher analogy on pillwatch.com, which appears to be an independent guide to prescription drugs. Here’s what they say about migraine treatment:

“In fact, the situation with migraine treatment may be compared with fire safety: you can always keep a fire extinguisher in your room for emergency cases and, of course, you can regularly follow certain rules, like to keep electric wiring in proper condition and does not forget to switch off the electric iron before going to the pub. In this example, fire extinguisher may be compared to the abortive migraine treatments, which become helpful in case of emergency (migraine attack); and following fire safety rules is somewhere close to preventive migraine treatments, which are used in order to lower the risks of emergency cases.” (See “Migraine Management: To Abort or To Prevent?“)

I wonder if Relpax sales reps routinely use this analogy when pitching to docs?