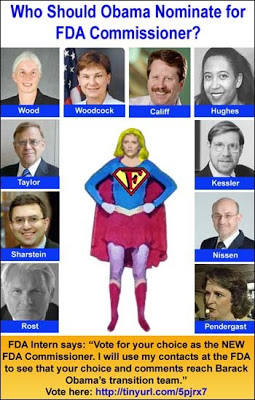 Who Should Obama Nominate for FDA Commissioner?

It seems like everyone in the Pharma Blogosphere and the press is recommending who president-elect Barack Obama should nominate — when he becomes president — as the new FDA Commissioner to replace Dr. Andrew von Eschenbach (see here for comments from the pundits and press).

The following list presents the major contenders the pundits have identified.

Please take a few minutes to tell me who you think President-elect Obama should nominate as the new FDA Commissioner. If you don’t like any of these choices, you can write-in your own candidate!

You can learn more about the contenders mentioned above when you access the survey site. After completing the survey, you will be able to see a summary of the results (de-identified to protect respondents anonymity).

Results of this survey may be summarized in Pharma Marketing News.

Your comments are confidential (anonymous) unless you specifically provide your contact information at the end of the survey and allow us to attribute comments to you personally.

See the Pharma Marketing Surveys Forum and the post “SURVEY: Who Should be FDA Commissioner?” for news and opinions about who the new FDA commissioner should be.