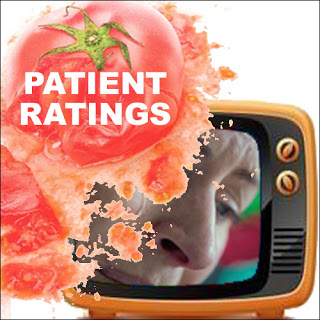 About this time every year, I get data from Kantar Media and Nielsen regarding how much money the U.S. pharmaceutical industry spends on direct-to-consumer (DTC) advertising.

The data I’m most interested in are the total spend for the year and what portion of that is digital versus TV. But it can be difficult to ferret out that information from the two different sources, which often report different numbers.

According to Nielsen numbers reported in the March 3 2017 issue of MM&M online, spending on direct-to-consumer pharmaceutical ads rose 9% to $5.6 billion in 2016 (read Direct-to-Consumer #Pharma Drug Ad Spending at an All-Time High).

A difference of $200 million is peanuts compared to the whole, but it’s just slightly more than what Pfizer spent promoting Xeljanz to consumers in 2016.

Now these Nielsen numbers apply only to what’s called “measured media,” which includes TV, magazines, newspapers, radio, outdoor, and Internet banner ads. It does NOT include websites, web videos, web audio, sponsored links, social media, mobile applications, and emails. It also does not include search engine marketing, which has been estimated to be 40% of the total pharma digital spend (consumer and physician).

I’m not exactly sure what Kantar considers “digital” versus what Nielsen does. I think it’s pretty obvious, however, that the pharma industry cannot be spending $515 million on banner ads alone. Perhaps Kantar’s number includes search engine marketing targeted to consumers. In any case, if that number is subtracted from the total, you get $5.9 billion, which is close to what Nielsen reported.

$5.8 billion, $5.9 billion, $6.4 billion. Whatever! The number is very high. It’s more important to look at trends and what portion of the total is allocated to different channels. 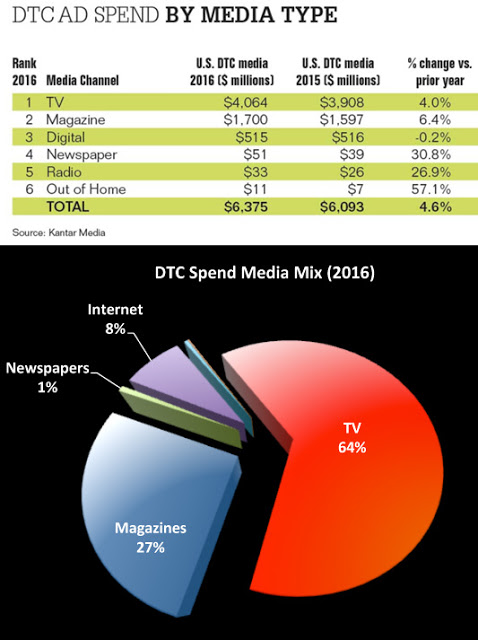 My friend Rich Meyer of World of DTC marketing doesn’t buy that.

“I have seen the biggest increases in digital on product websites and new product websites after initial website have launched,” Meyer says in a blog post [op cit]. “So why has digital declined in paid media? Simple, click fraud is way up and a lot of brands have finally started to analyze their search spending to find that it can be substantially cut” (read Expert Doesn’t Believe the Numbers Regarding Pharma’s Digital Ad Spend).

But TV dwarfs all other channels in terms of dollars spent on DTC advertising.

According to Kantar Health, TV DTC ad spending accounted for about 64% of the total spend in 2016 or 69% if you subtract digital from the total. That’s about the same as in 2015.

I can think of two reasons why pharma marketers spend so much on TV ads. First, it cost a lot more to do TV ads, especially if they involve location shoots as is often the case. Second, there’s an opportunity for brand managers to play at being directors, mingle with the stars, and even to have a “cameo” part in the production, not to mention the benefits of enjoying the exotic locations where many of the ads are filmed.

For more on this topic, read the April 4, 2017 issue of Pharma Industry News Update.