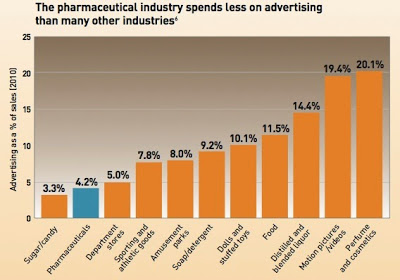 A BMJ articled titled “Pharmaceutical research and development: what do we get for all that money?” was roundly criticized by Rich Meyer of World of DTC Marketing blog and Derek Lowe of In the Pipeline blog. Both have both ripped into the central premise of the BMJ article; specifically critiquing these statements made by the authors: (1) the “widely touted innovation crisis in pharmaceuticals is a myth” and (2) for every dollar pharmaceutical companies spend on “basic research, $19 goes toward promotion and marketing.”

Everyone fools around with the numbers to reach their desired pre-ordained conclusions. I have blogged about this many times. First, I wrote about differing estimates of pharma’s expenditures on total marketing, not just direct-to-consumer (DTC) spending, which was used to create the above chart of dollars spent on advertising vs. sales. I’ve also compared this to how much the industry spends on research (see, for example, “Promotion vs. R&Deja vu all over again!“). My conclusion: The drug industry spends approximately the same on marketing as it does on research. So, can’t we all agree to that and just get along?

If you actually read the BMJ article, you might be surprised to learn that the authors’ goal seems to be to promote a NEW business model for the pharmaceutical industry:

“We should consider new ways of rewarding [drug industry] innovation directly, such as through the large cash prizes envisioned in US Senate Bill 1137, rather than through the high prices generated by patent protection,” said the authors.

I was intrigued to learn that a US Senate Bill has been proposed — although long tabled — that actually seriously proposed getting rid of patent protection for new drugs as an incentive for innovation. Here’s how the BMJ authors describe what SB 1137 proposes:

“The bill proposes the collection of several billion dollars a year from all federal and non-federal health reimbursement and insurance programmes, and a committee would award prizes in proportion to how well new drugs fulfilled unmet clinical needs and constituted real therapeutic gains. Without patents new drugs are immediately open to generic competition, lowering prices, while at the same time innovators are rewarded quickly to innovate again.”

The authors assure us that the approach advocated by SB 1137 “would save countries billions in healthcare costs and produce real gains in people’s health.”

Maybe so, but I seriously doubt that prizes awarded by a government committee (ie, “Board of Trustees for the Fund for Medical Innovation Prizes”) would be more effective than the profit motive or less prone to corruption than the industry’s cozy relationship with the FDA (ie, drug industry “users fees” directly cover the majority of FDA’s drug approval expenses).

SB 1137 also calls for 5 percent of the prize rewards fund (ie, 5% of about $80 BILLION or about $4 billion — the approximate amount pharma spends each year on DTC advertising) to be distributed to those who “provide open access to knowledge, data, materials, and technologies.” The bill claims that such “new open source business models… will induce greater access to useful knowledge, data, materials, and technologies.”

That’s interesting because I recently talked to people at Lilly — not the same people who created the above chart — about an “open access” project they are launching for innovative pharma research (see “Crowd Sourced Creative Commons Drug Information“).

When is a Free Lunch More Than Just Lunch?