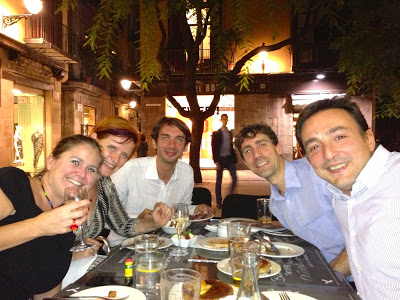 I recently attended the 3rd Annual Pharma eMarketing Congress hosted by Fleming Europe in Barcelona, Spain. While there, I managed to mix business, fun, and politics in the same trip.

This Congress has never failed to deliver and proves to me that in order to reap greater profits — i.e., learn new things, meet new people — you have to “outsource” yourself and travel to Europe, Asia, and South America. At least that’s my strategy as a “Global Brand.” The pharmaceutical industry, after all, is a global industry.

On the day I arrived — without my luggage! — I was interviewed by Teresa Bau Puig (@tbau_uoc), a free-lance journalist, communication and social media consultant from Barcelona. You can find the interview in her blog in the Ara newspaper (here). It is written in the Catalan language, which is interesting because the day after the interview, I participated in the Cadena humana per la independence — the Human Chain demonstration for the independence of Catalonia, which is a wealthy industrial region in the northeast that accounts for a fifth of Spain’s economic output.

Many Catalonians want independence from Spain. According to a Reuter’s report on the demonstration, “The Medieval Principality of Catalonia came under the Crown of Aragon, though it was allowed to run its own affairs through an institution known as the Generalitat. The human chain linked up on Wednesday at exactly 17:14, symbolizing the year 1714 when King Philip V abolished the Generalitat after the War of the Spanish Succession.”

Here I am in the chain in the Plaça d’Espanya just prior to 17:14 when I held hands with strangers. Does that mean I support the independence of Catalonia? I’m not sure. I was there because it was an event not to be missed and why not take part rather than just observe? It’s what a true proponent of social media would do and since there was no “counter” demonstrators, I joined the line. 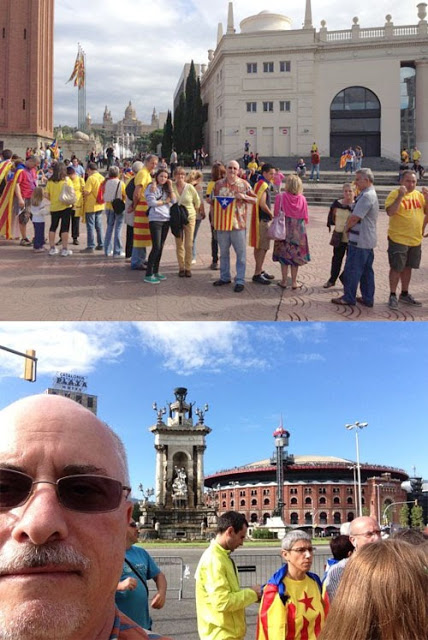 Any way, back to Teresa’s interview. Here are some selected excerpts that I translated with the help of Google. Teresa will provide a complete English translation later.

According to Google, Teresa said I am a “gentle man, accessible and fun.” That’s nice of her to say — as long as the Google translation is accurate 🙂 As I said, I did have fun with attendees of the conference. Here’s an example where several of us enjoyed tapas in the historic El Borne part of Barcelona (Plaça de les Olles):

In the interview, I mentioned a few ways in which I thought social media should be used more often by pharma companies. One way is to use social to be more pro-active regarding adverse event reporting rather than to avoid social media for fear of being exposed to adverse events. I said, for example, “If drug companies really want to establish contact and engage with patients through social media, [they] must respond [to] messages from patients about side effects and provide this information to regulatory authorities. I think this issue will have an impact on the relationship between patients and the pharmaceutical industry.”

“Yes,” I said. “U.S. companies always want to talk about the product, whereas European companies [cannot talk about products] with patients but [focus on] diseases, i.e., medical conditions that [their products address]. In Europe, therefore, [pharma companies] are more open to using social media than in the U.S. — American companies do not know how to talk about products [via social media while also] complying with FDA regulations. That is why the use of social media among European pharmaceutical companies seems more advanced than the U.S., which always put the focus on publicizing the brand name. But there are American companies [or U.S. affiliates of EU-based companies] that are doing interesting things, such as Sanofi U.S.” (see “Dennis Urbaniak, Joan Mikardos, and Laura Kolodjeski of Sanofi US Receive the 3rd PharmaGuy Social Media Pioneer Award“).

So, can EU-style pharma social media non-branded campaigns “translate” into sales? Not if you are looking into a direct link between the two. That is, you should not measure social media success by upticks in product sales. There are other KPIs. For more about that, see “Is Social Media Effective for Pharma Marketing?“

Teresa asked, “Do you think pharmaceutical companies are willing to establish a genuine dialogue with patients?”

“It’s funny you ask this,” I replied. “I just wrote about Boehringer Ingelheim and other companies that are having real conversations with patients on Facebook and Twitter, and not just with patients but also with health professionals [see, for example, “Pharma and Social Media – Comfy Bedfellows: Boehringer, AstraZeneca, & Janssen Get It On!“].

“In the past, companies did not want to get feedback from patients on social networking sites. I think the basic problem was that they did not have enough professionals dedicated to these channels. Responding to questions and comments on social networking sites is a lot of work and companies were not prepared to [hire] many professionals dedicated to this problem. Now it seems [many companies] have grasped the benefits of social media and are ready to hire professionals seeking dialogue and engagement with the patient through these channels.”

When Teresa asked if I had a new project in mind, I said, “In the future, I plan to focus on speaking and lectures — to write less and talk more.” My 2013 “Tour” of Germany and Italy is an example of future projects that I’d like to do (see “Bayer Pharma Meets Pharmaguy Meets Healthcare App Startups: A Call for Best Practices” and “Overcoming Pharma’s Social Media Challenges: My Roche Digital Academy Presentation“).

Globally, Pharma’s Digital Spend is (Still) Only 6% of Total Promotional...